The arrival of the Seljuk Turks in Anatolia forms an indispensable part of modern Turkish discourse on national identity, but Western scholars, by contrast, have rarely included the Anatolian Turks in their discussions about the formation of European nations or the transformation of the Near East. The Turkish penetration of Byzantine Asia Minor is primarily conceived of as a conflict between empires, sedentary and nomadic groups, or religious and ethnic entities. This book proposes a new narrative, which begins with the waning influence of Constantinople and Cairo over large parts of Anatolia and the Byzantine-Muslim borderlands, as well as the failure of the nascent Seljuk sultanate to supplant them as a leading supra-regional force. In both Byzantine Anatolia and regions of the Muslim heartlands, local elites and regional powers came to the fore as holders of political authority and rivals in incessant power struggles. Turkish warrior groups quickly assumed a leading role in this process, not because of their raids and conquests, but because of their intrusion into pre-existing social networks. They exploited administrative tools and local resources and thus gained the acceptance of local rulers and their subjects. Nuclei of lordships came into being, which could evolve into larger territorial units. There was no Byzantine decline nor Turkish triumph but, rather, the driving force of change was the successful interaction between these two spheres. 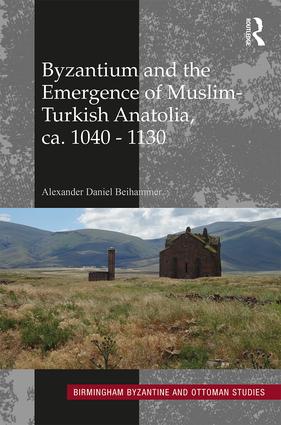