The recipient of the Kluge Prize for lifetime achievement in the humanities and the Tang Prize for “revolutionary research” in Sinology, Ying-shih Yü is a premier scholar of Chinese studies. Chinese History and Culture volumes 1 and 2 bring his extraordinary oeuvre to English-speaking readers. Spanning two thousand years of social, intellectual, and political change, the essays in these volumes investigate two central questions through all aspects of Chinese life: what core values sustained this ancient civilization through centuries of upheaval, and in what ways did these values survive in modern times?

From Yü Ying-shih’s perspective, the Dao, or the Way, constitutes the inner core of Chinese civilization. His work explores the unique dynamics between Chinese intellectuals’ discourse on the Dao, or moral principles for a symbolized ideal world order, and their criticism of contemporary reality throughout Chinese history.

Volume 1 of Chinese History and Culture explores how the Dao was reformulated, expanded, defended, and preserved by Chinese intellectuals up to the seventeenth century, guiding them through history’s darkest turns. Essays incorporate the evolving conception of the soul and the afterlife in pre- and post-Buddhist China, the significance of eating practices and social etiquette, the move toward greater individualism, the rise of the Neo-Daoist movement, the spread of Confucian ethics, and the growth of merchant culture and capitalism. A true panorama of Chinese culture’s continuities and transition, Yü Ying-shih’s two-volume Chinese History and Culture gives readers of all backgrounds a unique education in the meaning of Chinese civilization.

Volume 2 of Chinese History and Culture completes Ying-shih Yü’s systematic reconstruction and exploration of Chinese thought over two millennia and its impact on Chinese identity. Essays address the rise of Qing Confucianism, the development of the Dai Zhen and Zhu Xi traditions, and the response of the historian Zhang Xuecheng to the Dai Zhen approach. They take stock of the thematic importance of Cao Xueqin’s eighteenth-century masterpiece Honglou meng (Dream of the Red Chamber) and the influence of Sun Yat-sen’s Three Principles of the People, as well as the radicalization of China in the twentieth century and the fundamental upheavals of modernization and revolution. Ying-shih Yü also discusses the decline of elite culture in modern China, the relationships among democracy, human rights, and Confucianism, and changing conceptions of national history. He reflects on the Chinese approach to history in general and the larger political and cultural function of chronological biographies. By situating China’s modern encounter with the West in a wider historical frame, this second volume of Chinese History and Culture clarifies its more curious turns and contemplates the importance of a renewed interest in the traditional Chinese values recognizing common humanity and human dignity. 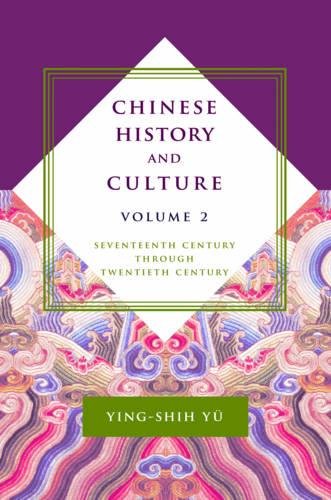