This book is about Vietnam from the beginning of recorded history in the third century B.C. to the tenth century, when Chinese control ended and an independent Vietnamese kingdom was established. During these twelve centuries, the Vietnamese evolved from a preliterate society within a “south-sea civilization” into a distinctive member of the East Asian cultural world. This long process was the birth of historical Vietnam.

Chinese historians and French sinologists have treated this period of Vietnamese history as a branch of Chinese history. They have seen Vietnam as little more than a refractory frontier province of the Chinese empire, blessed with China’s “civilizing” influence. Vietnamese historians, on the other hand, look at this era as a time when their ancestors struggled under alien rule, a time when their national identity was tested and refined. To gain a balanced view, it is important to consider both the information about Vietnam recorded by Chinese historians and the historical traditions that preserve what the Vietnamese have remembered from this time.

From a broader perspective, Vietnam stands on the frontier between East and Southeast Asia. The question of whether Vietnam “belongs” to Southeast Asia or to East Asia is probably one of the least enlightening in Vietnamese studies. Although everything from the Vietnamese language to Vietnamese eating habits reflects a distinctive blend of the two cultural worlds, literature, scholarship, and government administration clearly show that the Vietnamese have been participating members of the classical civilization of East Asia. This stems from the success of Chinese dynasties in enforcing a cultural and political frontier between the Vietnamese and their Southeast Asian neighbors for several centuries.

The birth of Vietnam described in this book was the birth of a new consciousness within the East Asian cultural world that had its roots outside that world. Within the context of East Asia as a whole, this was a frontier consciousness, but for the Vietnamese it was simply what
they happened to be. They had learned to articulate their non-Chinese identity in terms of China’s cultural heritage. Given the constraints imposed by Chinese power during long periods of their history, the survival of this identity is as significant as the cultural form in which it came to be expressed. 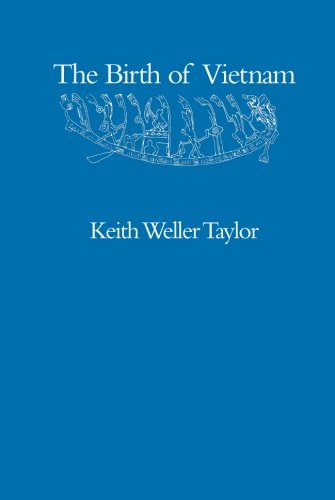