The Ultimate 9 Best Books You Must Read Before You Die

1. The Brothers Karamazov by Fyodor Dostoevsky
This book is widely considered to be one of the best books ever written, and it will undoubtedly change your life.
The story follows the lives of old man Karamazov, a filthy penny-pinching lech and his three sons. Each son represents a different side to the Russian character: Dimitri the spoiled lout (or the prodigal son); Ivan the tortured intellect; and Alyosha the spiritual searcher.
Alyosha, Dostoevs is our hero and he does represent a certain Christian ideal. In the end, he stands for brotherhood and meekness in the face of temptation. These qualities, no doubt, are what Dostoevsky suggests will preserve and redeem the Russian nation.

2. The Stranger by Albert Camus
(As featured in 10 Best Existential Fiction Books That Will Alter Your Existence)
The Stranger is a haunting and challenging masterpiece of literature.
While it is fiction, it actually manages to express the complex concepts and themes of existential philosophy better than the movement’s most noted philosophical writings.
It’s a fantastic read, especially for contemplating human nature and our roles in the universe, if any.

3. The Name Of The Wind by Patrick Rothfuss
(As featured in 8 Top Contenders For The Best Book You’ll Ever Read)
The Name of the Wind is very well written. The characters are real, the action is convincing and it has a compelling story to tell.
One of the best things about this book is that the magic is absolutely rooted in the book’s world. Nothing seems contrived, the consistency is excellent and the world is believable.

4. Flowers For Algernon by Daniel Keyes
(As featured in 10 Most Heartbreaking Must Read Books Ever Written)
This is a wonderful and highly original novel about a mentally challenged man named Charlie who wanted to be smart.
One day, his wish was granted. A group of scientists selected him for an experimental operation which would raise his intelligence to genius level.
Suddenly, Charlie found himself transformed and life changed.

5. The Count Of Monte Cristo by Alexandre Dumas
(As featured in 10 Books That Will Make You Fall In Love With Reading)
The epic adventure of Edmond Dantès and how he spent 14 years in a dungeon for a crime he didn’t commit, will keep you hooked to the point where your friends and family will be concerned for your well-being.
This story takes you through the journey of Edmond Dante, the boy growing up to become The Count Of Monte Cristo.

6. Siddhartha by Hermann Hesse
(As featured in 8 Books That Will Have A Profound Impact On Your Personality)
A spiritual book based loosely on the life of Buddha, Siddhartha tells the story of a Brahmins journey in search of ultimate reality.
This beautifully simple book has touched millions with its integration of Eastern and Western mythology and philosophy.
Along with Demien, this book is a must read for any Herman Hesse fan or anyone interested in Buddhism philosophy.

7. The Ultimate Hitchhiker’s Guide To The Galaxy by Douglas Adams
While often embarrassing in a public place, laughing out loud while reading is an example of pure pleasure.
This so rarely occurs that any author capable of producing this effect should be commended.
Douglas Adams is such an author.

8. The Lord Of The Rings by J. R. R. Tolkien
(As featured in 10 Greatest Fantasy Books)
There is absolutely no way to produce a fantasy books list without J.R.R. Tolkiens fantasy epic The Lord of the Rings.
“One Ring to rule them all, One Ring to find them, One Ring to bring them all and in the darkness bind them”.
This book will be the only fantasy book you’ll ever need to read, if you only read one.

9. To Kill A Mockingbird by Harper Lee
(As featured in 8 Best Books You Were Forced To Read In School)
From the opening line of the book:
“When he was nearly thirteen, my brother Jem got his arm badly broken at the elbow…”
Lee hooks the reader with a deceptively simple story of a Southern family and a Southern town caught up in a cataclysmic moral crisis.
And keeps us enthralled till the very last word. 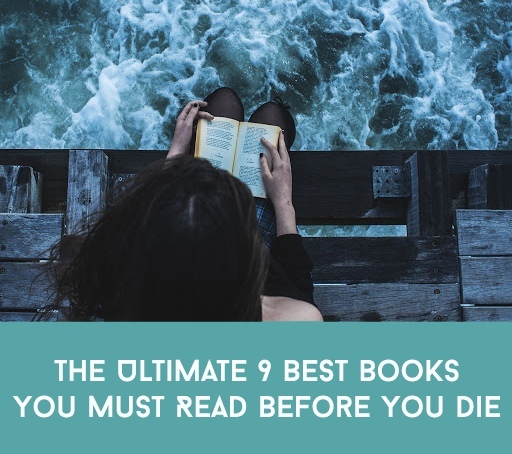