How Innovation Works: And Why It Flourishes in Freedom
Matt Ridley
Innovation is the main event of the modern age, the reason we experience both dramatic improvements in our living standards and unsettling changes in our society. Forget short-term symptoms like Donald Trump and Brexit, it is innovation itself that explains them and that will itself shape the 21st century for good and ill. Yet innovation remains a mysterious process, poorly understood by policy makers and businessmen, hard to summon into existence to order, yet inevitable and inexorable when it does happen.

Matt Ridley argues in this book that we need to change the way we think about innovation, to see it as an incremental, bottom-up, fortuitous process that happens to society as a direct result of the human habit of exchange, rather than an orderly, top-down process developing according to a plan. Innovation is crucially different from invention, because it is the turning of inventions into things of practical and affordable use to people. It speeds up in some sectors and slows down in others. It is always a collective, collaborative phenomenon, not a matter of lonely genius. It is gradual, serendipitous, recombinant, inexorable, contagious, experimental and unpredictable. It happens mainly in just a few parts of the world at any one time. It still cannot be modelled properly by economists, but it can easily be discouraged by politicians. Far from there being too much innovation, we may be on the brink of an innovation famine. 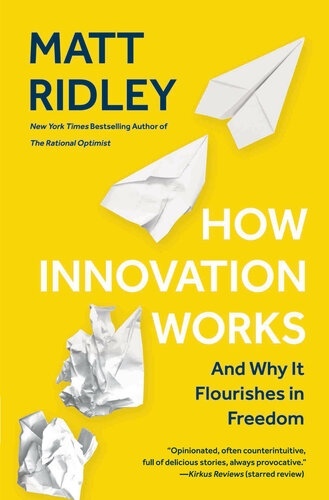 How_Innovation_Works_And_Why_It_Flourishes_in_Freedom_by_Matt_Ridley.epub
825.52 KB
Please Share This
Related Posts
Many magazines
on the
→ MAGAZINELIB.COM
Book for today - 2019-2022