Description:The story revolves around a poor young boy named Charlie Bucket born to a penniless, starving family. His two sets of grandparents reside in their children’s dilapidated, tiny house and lead a bedridden existence, and Charlie is fascinated by the universally-celebrated chocolate factory located in his hometown owned by famous chocolatier Willy Wonka. His Grandpa Joe often narrates stories to him about the chocolate factory and about its mysterious proprietor, and the mysteries relating to the factory itself; how it had gone defunct for years until it mysteriously re-opened after Wonka’s secret sweet recipes had been discovered (albeit no employees are ever seen leaving the factory).

Soon after, an article in the newspaper reveals that Willy Wonka has hidden a Golden Ticket in five chocolate bars being distributed to anonymous locations worldwide, and that the discovery of a Golden Ticket would grant the owner with passage into Willy Wonka’s factory and a lifetime supply of confectionery. Charlie longs for chocolate to satisfy his hunger and to find a Golden Ticket himself, but his chances are slim (his father has recently lost his job, leaving the family all but destitute) and word on the discovery of the tickets keeps appearing in various news articles read by the Bucket family, each one going to self-centred, bratty children: an obese, gluttonous boy named Augustus Gloop, a spoiled brat named Veruca Salt, a record-breaking gum chewer named Violet Beauregarde, and Mike Teavee, an aspiring gangster who is unhealthily obsessed with television. Eventually, Charlie finds a ticket of his own. 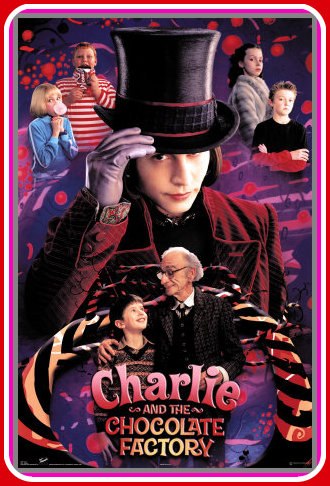 Charlie, the Chocolate Factory.pdf
264.47 KB
Please Share This
Related Posts
Many magazines
on the
→ MAGAZINELIB.COM
Book for today - 2019-2022