After Trump: Reconstructing the Presidency

In After Trump: Reconstructing the Presidency, Bob Bauer and Jack Goldsmith provide a comprehensive roadmap for reform of the presidency in the post-Trump era—whether that comes in four months or four years. In fourteen chapters they offer more than fifty concrete proposals concerning presidential conflicts of interest, foreign influence on elections, pardon power abuse, assaults on the press, law enforcement independence, Special Counsel procedures, FBI investigations of presidents and presidential campaigns, the role of the White House Counsel, war powers, control of nuclear weapons, executive branch vacancies, domestic emergency powers, how one administration should examine possible crimes by the president of a prior administration, and more. Each set of reform proposals is preceded by rich descriptions of relevant presidential history, and relevant background law and norms, that place the proposed reforms in context. All of the proposals are prefaced by a chapter that explains how Trump–and, in some cases, his predecessors–conducted the presidency in ways that justify these reforms. After Trump will thus be essential reading for the coming debate on how to reconstruct the laws and norms that constitute and govern the world’s most powerful office. It’s hard to imagine two better co-authors for the task. Both served in senior executive branch positions—in the administrations of Barack Obama and George W. Bush, respectively—and have written widely on the presidency here on Lawfare and elsewhere. Bob Bauer served from 2010-2011 as White House Counsel to President Barack Obama, who in 2013 named Bauer to be Co-Chair of the Presidential Commission on Election Administration. He is a Professor of Practice and Distinguished Scholar in Residence at New York University School of Law, as well as the co-director of its Legislative and Regulatory Process Clinic. Jack Goldsmith served as Assistant Attorney General, Office of Legal Counsel from 2003-2004, and Special Counsel to the Department of Defense from 2002-2003. He is the Learned Hand Professor at Harvard Law School, co-founder of Lawfare, and a Senior Fellow at the Hoover Institution. Together, in this book, they set the terms for the national discussion to come about the presidency, its powers, and its limits. 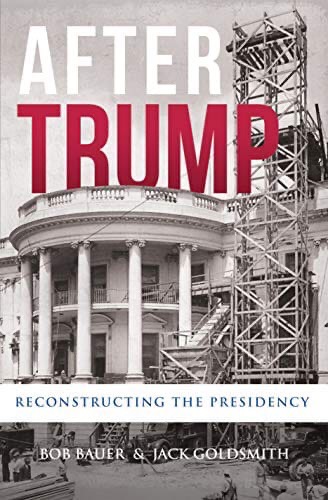 After Trump Reconstructing the Presidency by Jack L. Goldsmith.epub
408.49 KB
Please Share This
Related Posts
Many magazines
on the
→ MAGAZINELIB.COM
Book for today - 2019