Before the War of 1866 the name of Helmuth Von Moltke was scarcely known outside the Prussian army. His appointment as Chief of the General Staff was in many ways surprising, and he certainly did not himself expect it. He was thus put at the head of a military institution that was already to some extent superior to its counterparts elsewhere; he was to turn it into a formidable machine that became, in his hands, very nearly invincible. This was due to number of factors which coincided with his appointment. Among these were the many advances in military technology and logistics on the one hand, and on the other the emergence of Otto Von Bismarck as Minister-President of Prussia, with whom Moltke had a crucial, if occasionally uneasy, relationship.

This book follows Moltke’s part in the course of the campaign at the end of which his name had become a household word. It traces his rise to the position of Chief of the General Staff, against the background of the political situation of Prussia in the middle of the 19th Century, and the way in which he developed the functions of the General Staff. Moltke’s contribution to the allied campaign of Prussia and Austria against Denmark in 1864 was an important part of his own development, before the inevitable war between the successful allies in 1866.

As the book shows, for that war Moltke prepared his plans in the minutest detail. The triumphant success of his strategy in Bohemia was supplemented by the boldness of his campaign in western Germany, in which a small Prussian army overcame a huge numerical disadvantage. By the end of the Seven Weeks’ War Moltke had made Prussia the strongest military power in Europe. The Campaign of 1866 in Bohemia is covered in great detail, including the most extensive coverage of the Battle of Königgätz yet published in English.

The author has made full use of an extensive number of German language sources. His detailed text is accompanied by a number of black and white illustrations and battle maps. Orders of battle are also provided. This is the latest title in Helion’s groundbreaking series of 19th Century studies, and will again appear in hardback as a strictly limited edition printing of 750 copies, each individually numbered and signed by the author on a decorative title page. 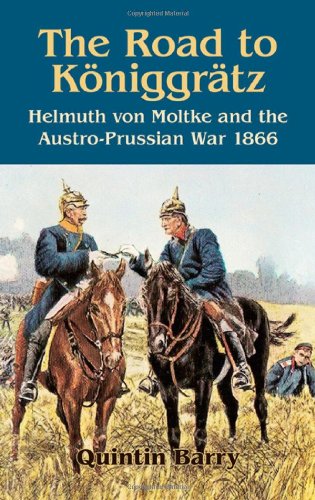 Road to Königgrätz. Helmuth von Moltke and the Austro-Prussian War 1866.epub
77.01 MB
Please Share This
Related Posts
Many magazines
on the
→ MAGAZINELIB.COM
Book for today - 2019-2022