World War II was by far the greatest war in the long bloody history of humankind. By virtually any standard of measure it dwarfs all wars that preceded it. The Greatest War is an American combat history of this war told largely in the words of the American soldiers, sailors, airmen, and marines, men of what Tom Brokaw has dubbed the “greatest generation,” who stood up to and ultimately emerged victorious from the crucible of four years of battle.

Starting with the attack on Pearl Harbor and concluding with the A-bomb at Nagasaki, author Gerald Astor presents a one volume, eyewitness account of Americans in combat including the lowest and highest ranks, from General of the Army Dwight Eisenhower on down to the almost anonymous privates.

There are first hand descriptions of near suicidal operations and missions, including the Doolitle Raid on Tokyo, the obliteration of an entire torpedo squadron at the Battle of Midway, the first airborne drop in North Africa, the hell of the Anzio beachhead. The celebrated battles and campaigns, the Allied invasion of Normandy, the liberation of Paris, the crossing of the Rhine River, the rescue of concentration camp survivors, the Japanese defeat in the Philippines, are detailed.

Astor presents the sense of what the American fighting man experienced in terms of what he thought, felt, saw, heard, and tried to do. While many hard fought battles have been omitted (Samule Eliot Morison needed twenty volumes just to cover the wartime activities of the navy and marines), The Greatest War covers all military services, and all theaters of operations, four years of extraordinary pain and suffering, and unparalleled honor and glory. 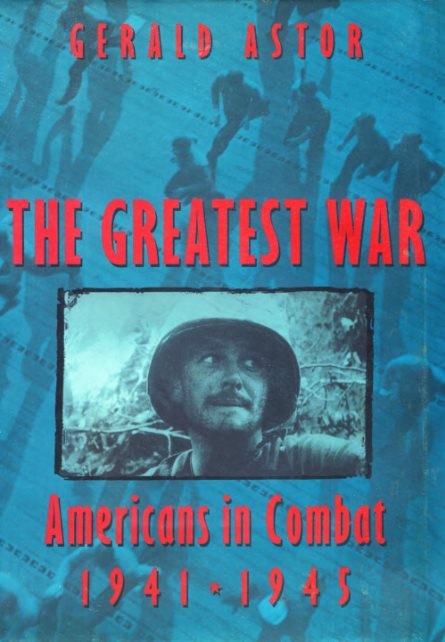