1. Don Quixote by Miguel de Cervantes
Alonso Quixano, a retired country gentleman in his fifties, lives in an unnamed section of La Mancha with his niece and a housekeeper. He has become obsessed with books of chivalry, and believes their every word to be true, despite the fact that many of the events in them are clearly impossible. Quixano eventually appears to other people to have lost his mind from little sleep and food and because of so much reading.

2. Hamlet by William Shakespeare
The Tragedy of Hamlet, Prince of Denmark, or more simply Hamlet, is a tragedy by William Shakespeare, believed to have been written between 1599 and 1601. The play, set in Denmark, recounts how Prince Hamlet exacts revenge on his uncle Claudius, who has murdered Hamlet’s father, the King, and then taken the throne and married Gertrude, Hamlet’s mother. The play vividly charts the course of real and feigned madness—from overwhelming grief to seething rage—and explores themes of treachery, revenge, incest, and moral corruption.

3. Moby Dick by Herman Melville
First published in 1851, Melville’s masterpiece is, in Elizabeth Hardwick’s words, “the greatest novel in American literature.” The saga of Captain Ahab and his monomaniacal pursuit of the white whale remains a peerless adventure story but one full of mythic grandeur, poetic majesty, and symbolic power. Filtered through the consciousness of the novel’s narrator, Ishmael, Moby-Dick draws us into a universe full of fascinating characters and stories, from the noble cannibal Queequeg to the natural history of whales, while reaching existential depths that excite debate and contemplation to this day.

4. One Hundred Years of Solitude by Gabriel Garcia Marquez
One of the 20th century’s enduring works, One Hundred Years of Solitude is a widely beloved and acclaimed novel known throughout the world, and the ultimate achievement in a Nobel Prize–winning career. The novel tells the story of the rise and fall of the mythical town of Macondo through the history of the Buendía family. It is a rich and brilliant chronicle of life and death, and the tragicomedy of humankind. In the noble, ridiculous, beautiful, and tawdry story of the Buendía family, one sees all of humanity, just as in the history, myths, growth, and decay of Macondo, one sees all of Latin America. Love and lust, war and revolution, riches and poverty, youth and senility — the variety of life, the endlessness of death, the search for peace and truth — these universal themes dominate the novel. Whether he is describing an affair of passion or the voracity of capitalism and the corruption of government, Gabriel García Márquez always writes with the simplicity, ease, andpurity that are the mark of a master. Alternately reverential and comical, One Hundred Years of Solitude weaves the political, personal, and spiritual to bring a new consciousness to storytelling. Translated into dozens of languages, this stunning work is no less than an accounting of the history of the human race.

5. The Brothers Karamazov by Fyodor Dostoyevsky
Dostoevsky’s last and greatest novel, The Karamazov Brothers, is both a brilliantly told crime story and a passionate philosophical debate. The dissolute landowner Fyodor Pavlovich Karamazov is murdered; his sons — the atheist intellectual Ivan, the hot-blooded Dmitry, and the saintly novice Alyosha — are all at some level involved. Bound up with this intense family drama is Dostoevsky’s exploration of many deeply felt ideas about the existence of God, the question of human freedom, the collective nature of guilt, the disastrous consequences of rationalism. The novel is also richly comic: the Russian Orthodox Church, the legal system, and even the author’s most cherished causes and beliefs are presented with a note of irreverence, so that orthodoxy and radicalism, sanity and madness, love and hatred, right and wrong are no longer mutually exclusive. Rebecca West considered it “the allegory for the world’s maturity, but with children to the fore.” This new translation does full justice to Dostoevsky’s genius, particularly in the use of the spoken word, which ranges over every mode of human expression.

6. The Great Gatsby by F. Scott Fitzgerald
The novel chronicles an era that Fitzgerald himself dubbed the “Jazz Age”. Following the shock and chaos of World War I, American society enjoyed unprecedented levels of prosperity during the “roaring” 1920s as the economy soared. At the same time, Prohibition, the ban on the sale and manufacture of alcohol as mandated by the Eighteenth Amendment, made millionaires out of bootleggers and led to an increase in organized crime, for example the Jewish mafia. Although Fitzgerald, like Nick Carraway in his novel, idolized the riches and glamor of the age, he was uncomfortable with the unrestrained materialism and the lack of morality that went with it, a kind of decadence.

7. Ulysses by James Joyce
Ulysses chronicles the passage of Leopold Bloom through Dublin during an ordinary day, June 16, 1904. The title parallels and alludes to Odysseus (Latinised into Ulysses), the hero of Homer’s Odyssey (e.g., the correspondences between Leopold Bloom and Odysseus, Molly Bloom and Penelope, and Stephen Dedalus and Telemachus). Joyce fans worldwide now celebrate June 16 as Bloomsday.

8. War and Peace by Leo Tolstoy
Epic in scale, War and Peace delineates in graphic detail events leading up to Napoleon’s invasion of Russia, and the impact of the Napoleonic era on Tsarist society, as seen through the eyes of five Russian aristocratic families.

9. Wuthering Heights by Emily Brontë
The narrative is non-linear, involving several flashbacks, and two primary narrators: Mr. Lockwood and Ellen “Nelly” Dean. The novel opens in 1801, with Mr. Lockwood arriving at Thrushcross Grange, a grand house on the Yorkshire moors that he is renting from the surly Heathcliff, who lives at nearby Wuthering Heights. Lockwood is treated rudely, and coldly by the brooding, unsociable Heathcliff, and is forced to stay at Wuthering Heights for a night because one of the savage dogs of the Heights attacks him, and the weather turns against him. The housekeeper cautiously takes him to a chamber to sleep through the night and warns him to not speak to Heathcliff about where he is sleeping, for he would get in deep trouble. 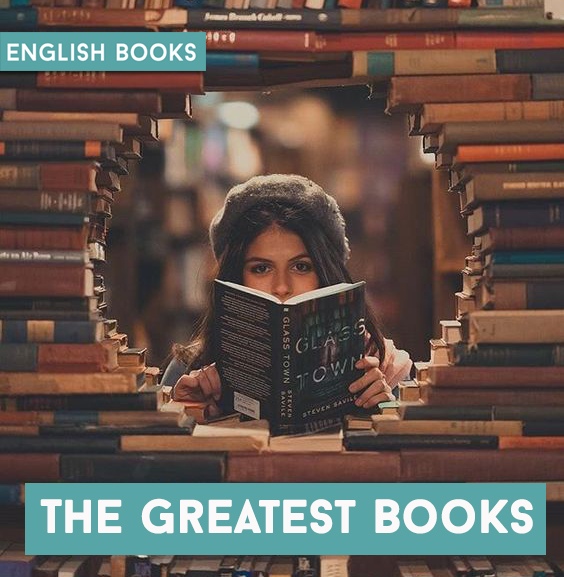 Wuthering Heights.epub
371.15 KB
Please Share This
Related Posts
Many magazines
on the
→ MAGAZINELIB.COM
Book for today - 2019-2022