Sex Books Worth the Read

Sex, intimacy, and Tantra expert Michaela Boehm writes about the importance of consciously engaging with our bodies—the mind-body connection that, she says, is the secret to finding deeper, greater pleasure. Embodiment, she says, is listening to our body’s signals, and she urges us to move our bodies in unstructured ways through practical exercises that bring us back into our feelings and our senses.

Mating in Captivity by Esther Perel

What does it take to keep the flame burning—even after years of marriage? Couples and sexuality therapist Esther Perel weighs in with her honest (and refreshingly provocative) insight on the possibility of a better sex life in this exceptionally entertaining examination of love and lust.

Come as You Are by Emily Nagoski, PhD

Emily Nagoski, a sex educator and former researcher at the Kinsey Institute, explores the ways we experience pleasure in this now-classic read on the science of women’s sexuality. It’s a nonjudgmental look at sexual desire, backed by scientific research and data. As Nagoski explains: An orgasm doesn’t have to be elusive, and a fulfilling sex life doesn’t just boil down to what’s between the sheets.

Author, activist, and doula adrienne maree brown makes the argument that the pursuit of pleasure is not just necessary to sustain ourselves through revolution but is actually a revolution in itself. Her philosophy extends beyond sex to every bit of life, from physical movement to friendship to work. She’ll drop homework assignments for you, too, to put pleasure into practice.

Peggy Orenstein’s fascinating research reveals the tough reality of high school and college hookup culture through in-depth interviews with students, academics, psychologists, and a range of other experts who weigh in on the complicated nature of modern sex and relationships. It’s an incredibly eye-opening read for all adults with a stake in the next generation, particularly parents, of course—and teens, too.

An equally revelatory, expansive counterpart to Orenstein’s Girls & Sex, Boys & Sex is the culmination of more than two years of research and a hundred-plus interviews with boys between the ages of sixteen and twenty-two. And as in Girls & Sex, Orenstein manages to present the data in a style that leaps off the page.

The Ethical Slut by Janet W. Hardy and Dossie Easton

Known as the bible for ethical nonmonogamy, The Ethical Slut guides the reader on the skills needed to keep everyone in a relationship—whether that’s just two of you or an extended network of sexual partners—on fair and equal footing. Most of the best advice is universal, like learning to get honest with yourself, communicating clearly with partners, and maintaining healthy self-esteem.

From sex therapist and psychology professor Laurie Mintz, Becoming Cliterate makes the case for focusing on clitoral stimulation. While the book includes plenty of information about the clitoris—there’s the requisite anatomy lesson and helpful advice—the overarching theme is the gap between male and female sexual pleasure. Mintz’s approach to closing that gap is practical and illuminating.

Psychiatrist Stephen Snyder argues that mindfulness may be the biggest turn-on there is and that sexual narcissism isn’t only acceptable; it’s needed. Which seems like a radical approach to sustaining passion in a long-term relationship. But whether you’ve been married for twenty years or you’re in a swipe-right chapter, Snyder believes that the essence of good—rewarding, memorable, impassioned—sex is understanding our sexual selves.

Better Sex through Mindfulness by Lori A. Brotto, PhD

Focusing on life outside of the bedroom, psychologist and sex researcher Lori A. Brotto takes a compassionate look at the different reasons we might suffer from various sexual difficulties. The most common yet somehow least talked about among them: a lack of interest. Brotto offers tools, in the form of easy exercises, for increasing desire and pleasure.

In her (highly anticipated) first book, journalist Lisa Taddeo immersed herself in the lives of three American women in different parts of the country for the better part of ten years. The result is an absorbing true story about sex and desire, trauma and longing, power and vulnerability, and the invisible forces that shape our sexuality. The writing is so poetic, it’s easy to forget it’s nonfiction. But we fell for Three Women because of the ordinary in it. We see ourselves in these women. Taddeo so gracefully reminds us that of course we’re normal. We’re all normal.

Sex for One by Betty Dodson, PhD

If you’re a fan of sex educator Betty Dodson—or a fan of masturbation—this book is for you. While so many books about sex focus on partnered sex, this is an unapologetic and straightforward guide to celebrating and improving sex for one.

Presented almost as a step-by-step guidebook, this is a difficult—but immensely gentle and helpful—read for anyone struggling with sex and intimacy after abuse. It’s also an important book for partners of sexual abuse survivors.

So Tell Me about the Last Time You Had Sex by Ian Kerner, PhD

When you and a partner get busy, what’s the typical schedule of events? Sex therapist Ian Kerner calls the patterns we slip into during intercourse our “sex script.” Drawing on decades of clinical experience and up-to-date sexual science, Kerner helps you understand what about your script feels stuck or unsatisfying. Then he helps you rewrite it.

Want Me by Tracy Clark-Flory

Sex with Shakespeare by Jillian Keenan

The Right to Sex by Amia Srinivasan

In The Right to Sex, philosopher and professor Amia Srinivasan picks apart what sex means beyond our bedroom walls. Her essays are a nuanced look at some of the most polarizing conversations in sex and sexuality: the distinction between sexual preference and discrimination, incel culture, and the return of second-wave, anti-porn feminism. Her essays push us out of our comfort zone in the best way.

If you’re interested in experimenting with kink, talking to intimate partners about what you want is a fundamental step in the process. In Tongue Tied, intimacy educator and coach Stella Harris dives into every stage of negotiating sexual desires, from overcoming fears and initiating conversations to addressing frustrations and understanding what’s good about hearing “no.” 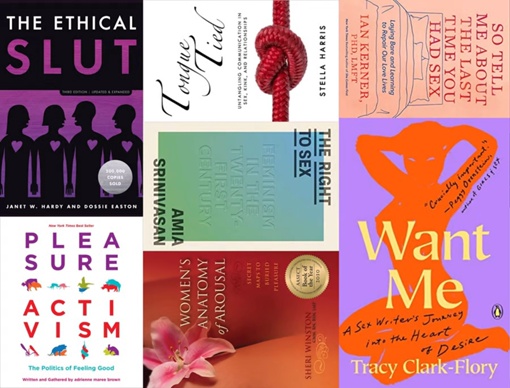 Love_Worth_Making_by_Stephen_Snyder_MD.epub
463.47 KB
Please Share This
Related Posts
Many magazines
on the
→ MAGAZINELIB.COM
Book for today - 2019-2022