Description:A Haitian Triptych An omnibus of novels Available in English for the first time, Marie Vieux-Chauvet’s stunning trilogy of novellas is a remarkable literary event. In a brilliant translation by Rose-Myriam Réjouis and Val Vinokur, Love, Anger, Madness is a scathing response to the struggles of race, class, and sex that have ruled Haiti. Suppressed upon its initial publication in 1968, this major work became an underground classic and was finally released in an authorized edition in France in 2005. In Love, Anger, Madness, Marie Vieux-Chauvet offers three slices of life under an oppressive regime. Gradually building in emotional intensity, the novellas paint a shocking portrait of families and artists struggling to survive under Haiti’s terrifying government restrictions that have turned its society upside down, transforming neighbors into victims, spies, and enemies. In ‘Love,’ Claire is the eldest of three sisters who occupy a single house. Her dark skin and unmarried status make her a virtual servant to the rest of the family. Consumed by an intense passion for her brother-in-law, she finds redemption in a criminal act of rebellion. In ‘Anger,’ a middle-class family is ripped apart when twenty-year-old Rose is forced to sleep with a repulsive soldier in order to prevent a government takeover of her father’s land. And in ‘Madness,’ René, a young poet, finds himself trapped in a house for days without food, obsessed with the souls of the dead, dreading the invasion of local military thugs, and steeling himself for one final stand against authority. Sympathetic, savage and truly compelling with an insightful introduction by Edwidge Danticat, Love, Anger, Madness is an extraordinary, brave and graphic evocation of a country in turmoil. 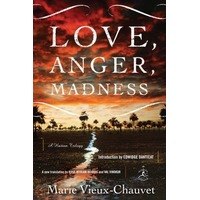