Brian Reade – An Epic Swindle. 44 Months with a Pair of Cowboys

AN EPIC SWINDLE is the inside story of how Liverpool FC came within hours of being re-possessed by the banks after the shambolic 44-month reign of American owners Tom Hicks and George Gillett. It is the tale of a civil war that dragged Britain’s most successful football club to its knees, through the High Court and almost into administration.

Players Steven Gerrard and Jamie Carragher tell of their anger at the broken promises, as well as their pain at watching loyal fans in open revolt. Manager, chief executive, board members, leading fans and journalists reveal the turmoil at a revered sporting institution run by two men at war with each other, who trampled Liverpool’s cherished traditions into the gutter.

No story sums up the naked greed at the heart of modern football quite like Hicks’ and Gillett’s attempt to turn a buck at Liverpool. No-one has had as much access to the truth, or tells it with as much passion, wit and insight as Brian Reade.

AN EPIC SWINDLE is the riveting story of how close one of the great football clubs came to financial implosion. 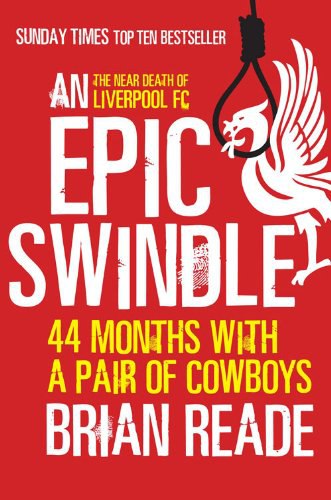 Brian Reade - An Epic Swindle. 44 Months with a Pair of Cowboys.pdf
1.03 MB
Please Share This
Related Posts
Many magazines
on the
→ MAGAZINELIB.COM
Book for today - 2019-2022