1) Archives from Elephantine: The Life of an Ancient Jewish Military Colony – B. Porten
University of California Press | 1969 | PDF

In the fifth century B.C.E. a colony of Jewish soldiers protected the interests of the Persian Empire on the island of Elephantine at the southern border of Egypt. The colony has transmitted to posterity three Aramaic archives of some dozen documents each. Two are family archives and one is a communal archive. The discovery and publication in the first decade of this century of two of these archives caused a sensation in learned circles not unlike that produced a half-century later by the discovery of the Dead Sea Scrolls. The increasing popularity of Qumran studies coincided with the publication of the third archive and tended to eclipse the full significance of the Elephantine texts.

Much as the papyri extend our knowledge in many fields, they also pose numerous questions. They state that the Jewish settlement preceded the Persian conquest but do not reveal when or why Jews settled in Elephantine. There are many indications that the Jewish settlement constituted a military colony, but the organization of that colony and its precise tasks are not spelled out. The monetary unit was the shekel. How much was it worth? ‘What did the soldiers and their families cat and wear and what were their dwellings like? It is indicated that the Jews possessed a Temple to their God YHW but it is not stated when or why it was established. The Temple was destroyed by the local Egyptian priests in collusion with the Persian officials, but the reason for this act is not given. Although the Jews deeply mourned the destruction of their Temple they seem to have divided their religi b us loyalties among more than one deity. The Sabbath is mentioned but appears to have been honored more in the breach than in the observance. The family archives concern an Egyptian slave girl married to a free man, and a woman who was married three times, twice to Egyptian builders. Were these situations unusual?

This important volume contains 170 documents from the Egyptian border fortresses of the Elephantine and Syene (Aswan), which yielded hundreds of papyri in Hieratic, Demotic, Aramaic, Greek, Latin and Coptic, spanning a period of 3000 years. The documents include letters from legal documents and accounts from family and other archives, and are thus an invaluable source of knowledge of epistolography, law, society, religion, language and onomastic in this unique site and over this long period of time to scholars of varied disciplines. The volume contains five sections, each containing carefully translated and extensively annotated documents of one language group. Excellent cross-referencing allows the user to trace forerunners and successors. Each section is preceded by an introduction, and the book closes with a glossary of technical terms in five languages. 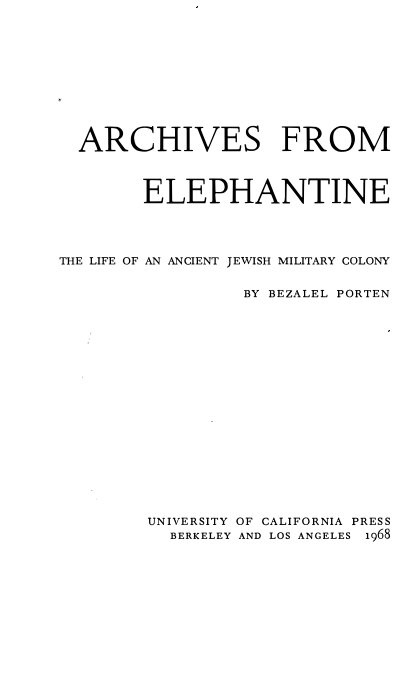 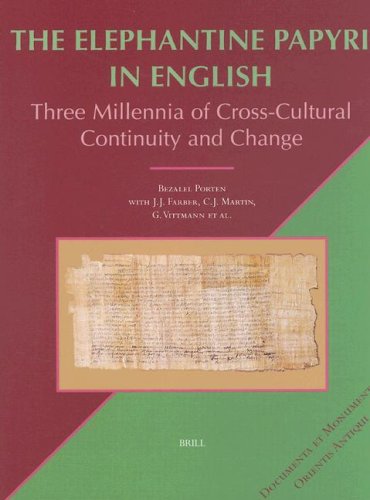