John Guest has chosen to write about one of those tantalisingly elusive communities, often small in numbers, which one finds here and there embedded colloidally in the main strata of Middle East societies; in this case, the Yezidis, a people whose very antiquity invites consideration of an associated mystery, the mechanics of survival for a small group when confronted with the constant challenge and threat of cultural assimilation. The very few European travellers who crossed the comfortless and unmapped wastes of northern Mesopotamia in the nineteenth century occasionally encountered the name, but only uncertainly the reality, of the Yezidis, a community usually dismissed by the Ottoman pashas of Mosul, in whose province they were largely to be found, as a worthless set of devil-worshipping trouble makers. They only worsened the nomadic turbulence of Ottoman Kurdistan, exchanging the life of sedentarists for that of marauders whenever a sequence of dry seasons occurred, or rival Kurdish tribal confederations closed in on their temporary success as farmers.

Unclassifiable with Muslims, Christians or Jews as Ahl al-Kitab, as people blessed with the divine revelation of a God-inspired book, the Yezidis found themselves consigned by their nominal rulers to the Dahr ul-Harb, that Domain of War where unguided mankind lived in theological darkness. Consequently, Yezidi land, lives and property were available to any pious folk able to prevail over them, and in effect they were outlaws, which was by no means the fate of most Kurds, however great their reputation for disloyalty at the Ottoman Porte. Extant eighteenth-century firmans admonish vezirs and pashas to be mindful of the Yezidis as an intractable law-and-order problem. While few Europeans sensed that Ottoman knowledge of the Yezidi people and their religion was sketchy in the extreme, fewer still possessed the linguistic skills necessary to press more systematic enquiry to a fruitful conclusion. Just finding the Yezidis in their mountainous homelands was difficult enough. Thus for a long time they made only peripheral appearances in the scholarship of orientalists or the recollections of travellers. 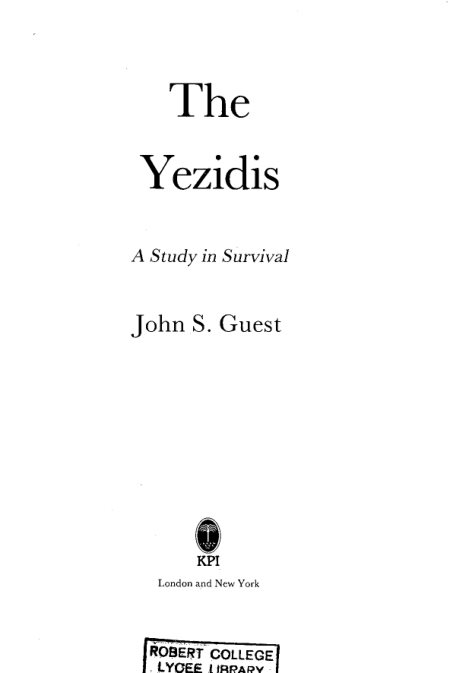 The Yezidis. A Study in Survival.pdf
16.54 MB
Please Share This
Related Posts
Book for today - 2019