While soldiers were off fighting on the fields of war, civilians on the home front fought their own daily struggles, sometimes removed from the violence but often enough from deep within the maelstrom of conflict. Chapters provide readers with an excellent, detailed description of how women, children, slaves, and Native Americans coped with privation and looming threat, and how they often used, or tried to use, periods of turmoil to their own advantage. While it is the soldiers who are often remembered for their strength, honor, and courage, it is the civilians who keep life going during wartime. This volume presents the lives of these brave citizens during the early colonial era, the American Revolution, the War of 1812, the Mexican War, and the Civil War.

This volume begins with Armstrong Starkey’s detailed description of wartime life during the American Colonial era, beginning with the Jamestown, VA settlement of 1607. Among his discussions of civilian lives during the Pequot War, King Philip’s War, and the Seven Years’ War, Starkey also examines Native American attitudes regarding war, Puritan lives, and Salem witchcraft and its connection to war. Wayne E. Lee continues with his chapter on the American Revolution, investigating how difficult it was for civilians to choose sides, including a telling look at soldier recruitment strategies. He also surveys how inflation and shortages adversely affected civilians, in addition to disease, women’s roles, slaves, and Native Americans as civilians. Richard V. Barbuto discusses the War of 1812, taking a close look at life on the ever-expanding frontier, rural homes and families, and jobs and education in city life. Gregory S. Hospodor observes American life during the Mexican War, examining how that conflict amplified domestic tensions caused by sharply divided but closely-held beliefs about national expansion and slavery. Continuing, James Marten looks at southern life in the South during the Civil War, examining the constant burden of supporting Confederate armies or coping with invading northern ones. Paul A. Cimbala concludes this volume with a look at northerner’s lives during the Civil War, offering an outstanding essay on a home front mobilized for a titanic struggle, and how the war, no matter how remote, became omnipresent in daily life.

When first published, Daily Life in Civil War America shifted the spotlight from the conflict’s military operations and famous leaders to its affect on day-to-day living. Now this popular, groundbreaking work returns in a thoroughly updated new edition, drawing on an expanded range of journals, journalism, diaries, and correspondence to capture the realities of wartime life for soldiers and citizens, slaves and free persons, women and children, on both sides of the conflict.

In addition to chapter-by-chapter updating, the edition features new chapters on two important topics: the affects of the war on families, focusing on the absence of men on the home front and the plight of nearly 26,000 children orphaned by the war; and the activities of the Copperheads, anti-Confederate border residents, and other Southern pacifist groups.

In post-Civil War America, civilians were ordinarily far-removed from the actual fighting. War brought about tremendous and far-reaching changes to America’s society, politics, and economy nonetheless. Readers are offered detailed glimpses into the lives of ordinary folk struggling with the privations, shortages, and anxieties brought on by U.S. entry into war. They are also shown how they strove to turn changing times to their advantage, especially civically and economically, as minorities pressed for political inclusion and traders profited from government contracts and women took on well-paying skilled jobs in large numbers for the first time.

Susan Badger Doyle’s chapter on the Indian Wars in the American West shows how for whites the migration westward was the path to a land of opportunity, for Native Americans migration it was a disastrous epoch that led to their near-extermination. Michael Neiberg’s piece on World War I highlights how America’s entry into the war on the Allied side was far from universally popular or supported because of large German and Irish immigrant communities, and how this tepid support led to the creation of some of the harshest censorship and curtailment of civil rights in U.S. history. Judy Litoff’s chapter on the home front during World War II focuses on the exceptional changes brought on by total mobilization for the war effort, African-Americans’ push for expanded civil rights, to women entering the workforce in large numbers, to the public’s acceptance, even expectation, of centralized planning and government intervention in economic and social matters. Jon Timothy Kelly’s essay on the Cold War provides a look at how the country quickly returned to a state of readiness when the end of World War II ushered in the Cold War and the immanent threat of nuclear annihilation, even as a booming economy brought undreamt of material prosperity to huge numbers of Americans. Finally, James Landers describes how American involvement in Vietnam, the first televised war, profoundly changed American attitudes about war even as this particular conflict touched few Americans, but divided them like few previous events have. 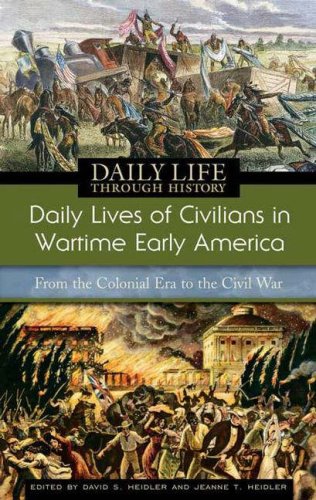 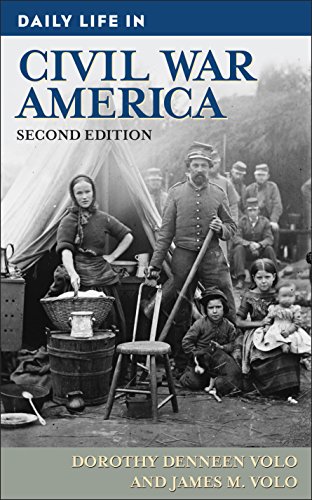 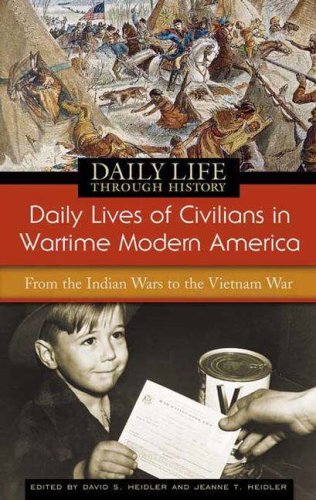 Daily Lives of Civilians in Wartime Early America. From the Colonial Era to the Civil War.pdf
2.74 MB