Napoleonic war was nothing if not complex—an ever-shifting kaleidoscope of moves and intentions, which by themselves went a long way towards baffling and dazing his conventionally-minded opponents into that state of disconcerting moral disequilibrium which so often resulted in their catastrophic defeat.

The Campaigns of Napoleon is an exhaustive analysis and critique of Napoleon’s art of war as he himself developed and perfected it in the major military campaigns of his career. Napoleon disavowed any suggestion that he worked from formula (“Je n’ai jamais eu un plan d’opérations”), but military historian David Chandler demonstrates this was at best only a half-truth. To be sure, every operation Napoleon conducted contained unique improvisatory features. But there were from the first to the last certain basic principles of strategic maneuver and battlefield planning that he almost invariably put into practice. To clarify these underlying methods, as well as the style of Napoleon’s fabulous intellect, Mr. Chandler examines in detail each campaign mounted and personally conducted by Napoleon, analyzing the strategies employed, revealing wherever possible the probable sources of his subject’s military ideas.

The book opens with a brief account of Bonaparte’s early years, his military education and formative experiences, and his meteoric rise to the rank of general in the army of the Directory. Introducing the elements of Napoleonic “grand tactics” as they developed in his Italian, Egyptian, and Syrian campaigns, Mr. Chandler shows how these principles were clearly conceived as early as the Battle of Castiglione, when Napoleon was only twenty-six. Several campaigns later, he was Emperor of France, busily constructing the Grande Armée. This great war machine is described in considerable detail: the composition of the armies and the élite Guard; the staff system and the methods of command; the kind of artillery and firearms used; and the daily life of the Grande Armée and the all-seeing and all-commanding virtuoso who presided over every aspect of its operation in the field.

As the great machine sweeps into action in the campaigns along the Rhine and the Danube, in East Prussia and Poland, and in Portugal and Spain, David Chandler follows closely every move that vindicates—or challenges—the legend of Napoleon’s military genius. As the major battles take their gory courses—Austerlitz, Jena, Fried-land—we see Napoleon’s star reaching its zenith. Then, in the Wagram Campaign of 1809 against the Austrians—his last real success—the great man commits more errors of judgment than in all his previous wars and battles put together. As the campaigns rage on, his declining powers seem to justify his own statement: “One has but a short time for war.” Then the horrors of the Russian campaign forever shatter the image of Napoleonic invincibility. It is thereafter a short, though heroic and sanguinary, road to Waterloo and St. Helena.

Napoleon appears most strikingly in these pages as the brilliant applier of the ideas of others rather than as an original military thinker, his genius proving itself more practical than theoretical. Paradoxically, this was both his chief strength and his main weakness as a general. After bringing the French army a decade of victory, his methods became increasingly stereotyped and, even worse, were widely copied by his foes, who operated against him with increasing effectiveness toward the end of his career. Yet even though his enemies attempted to imitate his techniques, as have others in the last century and a half, no one ever equaled his success. As these meticulous campaign analyses testify, his multifaceted genius was unique. Even as the end approached, as David Chandler points out, his eclipse was “the failure of a giant surrounded by pygmies.”

“The flight of the eagle was over; the ‘ogre’ was safely caged at last, and an exhausted Europe settled down once more to attempt a return to former ways of life and government. But the shade of Napoleon lingered on irresistibly for many years after his death in 1821. It lingers yet.” 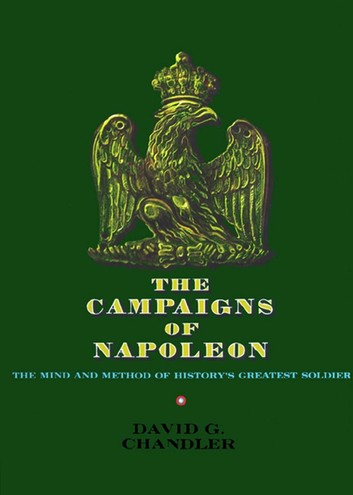