Description: That is perhaps what initially drew me to a book called 100 Cupboards. I would love to have a wall covered with 100 cupboards, as that would mean 100 places in which I could compartmentalize things! The book’s cover, depicting a few of the 100 compartments, cupboards, drawers, and cabinets that line one attic wall, is certainly eye catching, as well.

For those less interested in organization, the second best thing about the book is that each cupboard leads to a different place, different time, or different reality. As you can imagine, this could easily lead a young boy to adventure. The boy’s name is Henry York, and he has just come to live with his aunt, uncle, and three female cousins after his parents were taken hostage in Colombia, South America. Hey, it could happen.

In his attic bedroom, Henry discovers the aforementioned wall of cupboards hidden behind a wall of plaster. After removing all of the plaster, and making quite a mess, he begins to explore the cupboards and where they lead. The cupboards are controlled by two knobs in the center of the wall, which work like compasses. The doors will open according to the direction the knobs are facing. And that is just the beginning. There is also a door in the house that is locked, and cannot be opened by anything, including a chain saw. There are the letters which come through one of the cabinets, which is really a small post box. And there is the numbered diagram in the front of the book, depicting all of the cupboards with notes regarding where and to when they lead. There are still so many cupboards to explore! You’ll be anxious for more by the book’s end, so be sure to check out the sequel. 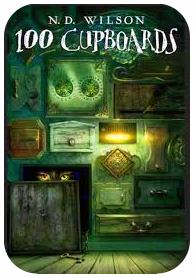 100 Cupboards.txt
337.97 KB
Please Share This
Related Posts
Many magazines
on the
→ MAGAZINELIB.COM
Book for today - 2019