The Best of Non-fiction

1. The Man Who Mistook His Wife For A Hat: And Other Clinical Tales by Oliver Sacks
In his most extraordinary book, “one of the great clinical writers of the twentieth century” (The New York Times) recounts the case histories of patients lost in the bizarre, apparently inescapable world of neurological disorders.

Oliver Sacks’s The Man Who Mistook His Wife for a Hat tells the stories of individuals afflicted with fantastic perceptual and intellectual aberrations: patients who have lost their memories and with them the greater part of their pasts; who are no longer able to recognize people and common objects; who are stricken with violent tics and grimaces or who shout involuntary obscenities; whose limbs have become alien; who have been dismissed as retarded yet are gifted with uncanny artistic or mathematical talents.

If inconceivably strange, these brilliant tales remain, in Dr. Sacks’s splendid and sympathetic telling, deeply human. They are studies of life struggling against incredible adversity, and they enable us to enter the world of the neurologically impaired, to imagine with our hearts what it must be to live and feel as they do. A great healer, Sacks never loses sight of medicine’s ultimate responsibility: “the suffering, afflicted, fighting human subject.”

2. Broca’s Brain: Reflections on the Romance of Science by Carl Sagan
Carl Sagan, writer and scientist, returns from the frontier to tell us about how the world works. In his delightfully down-to-earth style, he explores and explains a mind-boggling future of intelligent robots, extraterrestrial life and its consquences, and other provocative, fascinating quandries of the future that we want to see today.

3. Evolution: The Triumph of an Idea by Carl Zimmer
This remarkable book presents a rich and up–to–date view of evolution that explores the far–reaching implications of Darwin’s theory and emphasizes the power, significance, and relevance of evolution to our lives today. After all, we ourselves are the product of evolution, and we can tackle many of our gravest challenges –– from lethal resurgence of antiobiotic–resistant diseases to the wave of extinctions that looms before us –– with a sound understanding of the science.

4. Flatland: A Romance of Many Dimensions by Edwin A. Abbott
This masterpiece of science (and mathematical) fiction is a delightfully unique and highly entertaining satire that has charmed readers for more than 100 years. The work of English clergyman, educator and Shakespearean scholar Edwin A. Abbott (1838-1926), it describes the journeys of A. Square, a mathematician and resident of the two-dimensional Flatland, where women-thin, straight lines-are the lowliest of shapes, and where men may have any number of sides, depending on their social status.
Through strange occurrences that bring him into contact with a host of geometric forms, Square has adventures in Spaceland (three dimensions), Lineland (one dimension) and Pointland (no dimensions) and ultimately entertains thoughts of visiting a land of four dimensions—a revolutionary idea for which he is returned to his two-dimensional world. Charmingly illustrated by the author, Flatland is not only fascinating reading, it is still a first-rate fictional introduction to the concept of the multiple dimensions of space. “Instructive, entertaining, and stimulating to the imagination.” — Mathematics Teacher.

5. Genome by A.G. Riddle
In 2003, the first human genome was sequenced. But the secrets it held were never revealed.

The truth was discovered thirty years ago, almost by accident. Dr. Paul Kraus had spent his entire career searching for what he called humanity’s lost tribes–human ancestors who had gone extinct. When Kraus compared the DNA samples of the lost tribes with our own, he found a pattern of changes: a code. At the time, the technology didn’t exist to unravel what it meant. To protect the secret, Kraus hid his work and disappeared. Now the technology exists to finally understand the mysterious code buried in the human genome, but finding the pieces of Kraus’s research is more dangerous than anyone imagined.

Dr. Peyton Shaw and her mother have obtained part of Kraus’s research–and a cryptic message that could lead to the remaining pieces. They believe his work is the key to stopping a global conspiracy–and an event that will change humanity forever.

The ultimate secret, buried in the human genome, will change our very understanding of what it means to be human. For Peyton, finding it may come at an incredible price. She must weigh the lives of strangers against those she loves: Desmond Hughes and her mother. With time running out, Peyton makes a fateful choice–one that can never be undone.

6. Guns, Germs, and Steel: The Fates of Human Societies by Jared Diamond
In this “artful, informative, and delightful” (William H. McNeill, New York Review of Books) book, Jared Diamond convincingly argues that geographical and environmental factors shaped the modern world. Societies that had had a head start in food production advanced beyond the hunter-gatherer stage, and then developed religion —as well as nasty germs and potent weapons of war —and adventured on sea and land to conquer and decimate preliterate cultures. A major advance in our understanding of human societies, Guns, Germs, and Steel chronicles the way that the modern world came to be and stunningly dismantles racially based theories of human history. Winner of the Pulitzer Prize, the Phi Beta Kappa Award in Science, the Rhone-Poulenc Prize, and the Commonwealth club of California’s Gold Medal.

7. October: The Story of the Russian Revolution by China Miéville
On the centenary of the Russian Revolution, China Miéville tells the extraordinary story of this pivotal moment in history.
In February of 1917 Russia was a backwards, autocratic monarchy, mired in an unpopular war; by October, after not one but two revolutions, it had become the world’s first workers’ state, straining to be at the vanguard of global revolution. How did this unimaginable transformation take place?
In a panoramic sweep, stretching from St Petersburg and Moscow to the remotest villages of a sprawling empire, Miéville uncovers the catastrophes, intrigues and inspirations of 1917, in all their passion, drama and strangeness. Intervening in long-standing historical debates, but told with the reader new to the topic especially in mind, here is a breathtaking story of humanity at its greatest and most desperate; of a turning point for civilisation that still resonates loudly today.

8. Stiff: The Curious Lives of Human Cadavers by Mary Roach
Stiff is an oddly compelling, often hilarious exploration of the strange lives of our bodies postmortem. For two thousand years, cadavers―some willingly, some unwittingly―have been involved in science’s boldest strides and weirdest undertakings. In this fascinating account, Mary Roach visits the good deeds of cadavers over the centuries and tells the engrossing story of our bodies when we are no longer with them.

9. The Grand Design by Stephen Hawking
When and how did the universe begin? Why are we here? Is the apparent ‘grand design’ of our universe evidence for a benevolent creator who set things in motion? Or does science offer another explanation? In The Grand Design, the most recent scientific thinking about the mysteries of the universe is presented in language marked by both brilliance and simplicity. Model dependent realism, the multiverse, the top-down theory of cosmology, and the unified M-theory – all are revealed here.

This is the first major work in nearly a decade by one of the world’s greatest thinkers. A succinct, startling and lavishly illustrated guide to discoveries that are altering our understanding and threatening some of our most cherished belief systems, The Grand Design is a book that will inform – and provoke – like no other. 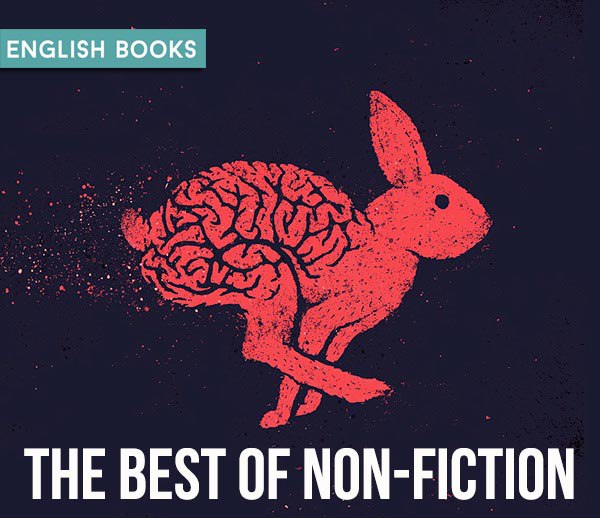 The Grand Design.epub
2.10 MB
Please Share This
Related Posts
Many magazines
on the
→ MAGAZINELIB.COM
Book for today - 2019