The Last Stargazers: The Enduring Story of Astronomy’s Vanishing Explorers by Emily Levesque

Emily Levesque, an astronomy professor at the University of Washington, has been through it all: striving to see stars despite sub-zero temperatures, handling equipment worth millions, and fighting for her place as a woman in the field. This is the life of an astronomer as untold by Brian Cox’s latest BBC documentary (though we do recommend you watch it!).
But now, we sit at the precipice of a new way of observing the stars – through robots, instead of our own eyes – and that has consequences across the sciences.
In The Last Stargazers, Levesque asks us all to think about our relationship with the Universe, and to warn against casting aside that childlike sense of wonder for things closer to home.

Breath: The New Science of a Lost Art by James Nestor

Are you breathing right now? Of course you are. But how are you breathing? Through your nose, or your mouth? Does your chest rise and fall, or your abdomen?
These things affect not just how much oxygen you take in, but your overall health and wellbeing; from the cavities in your teeth, to the beat of your heart and quality of your sleep. Nestor himself experiences all of the problems that come particularly from mouthbreathing, as he takes part in an experiment that involves some rather uncomfortable plugs wedged in each nostril for 10 days straight.
Before reading Breath, I had no idea that something I do without any conscious effort – and I thought I was doing it quite well, to be frank – could be a such detriment to my own health. Be warned, though: reading it may make you suddenly fascinated by the breathing styles of every person around you, much to the chagrin of those involved.

The End of Bias: How We Change Our Minds by Jessica Nordell

For ten years, journalist Jessica Nordell has focussed on unconscious bias – what it is, why we all have it, and how we can counteract it. In this, her first book, she brings a decade of research together to provide a manifesto for ending bias.
With the help of experts across neuroscience and psychology, Nordell reveals why our brains tend toward biases, how stress-reducing techniques like mindfulness can help people become more altruistic, and why we should be optimistic about a more equal future.

The Sleeping Beauties: And Other Stories of Mystery Illness by Suzanne O’Sullivan

Though it may be titled like one, this is not a collection of fairy tales. These are stories of real people, with medical disorders that medicine neither knows how to explain or how to treat.
The eponymous beauties are refugee children in Sweden, who fall into comas for weeks, months or years, yet their brain scans all show the picture of health. A group of school girls in Colombia collapse in the middle of their classrooms, with an unknown illness that has continued to spread for over five years, affecting around 1,000 other children.
O’Sullivan travels around the world to speak with patients and their families, and their stories are often heartbreaking – especially for those readers who have experienced their own mystery illness.

The whole world has been watching as researchers worked to develop coronavirus vaccines, but science hasn’t always been under such scrutiny. In fact, some of the practices that modern scientific publications rely on “fails to safeguard against scientists’ inescapable biases and foibles,” according to psychologist Stuart Ritchie.
Ritchie uncovers the unreliable, the exaggerated and the completely made-up research that underpins many of our beliefs today. These frauds and failures don’t just undermine science – they claim lives.
For fans of Ben Goldacre’s Bad Science, Science Fictions is both a detailed and an accessible account of what went wrong with research, and how to fix it.

Entangled Life: How Fungi Make Our Worlds, Change Our Minds and Shape Our Futures by Merlin Sheldrake

Our relationship with fungi spans millions of years, as without them, the ancestors of plants would have never made it out of the water and onto land. This symbiotic relationship between the fungal and the plant kingdoms continues today, and though their world is one of cells and spores, the journey through it is as magical and colourful as any non-fiction could be.
Biologist Merlin Sheldrake takes us up the hills of Bologna, evokes the richness of the elusive white truffle, and implores that we all look down every once in a while to appreciate the sprawling structures beneath our feet. 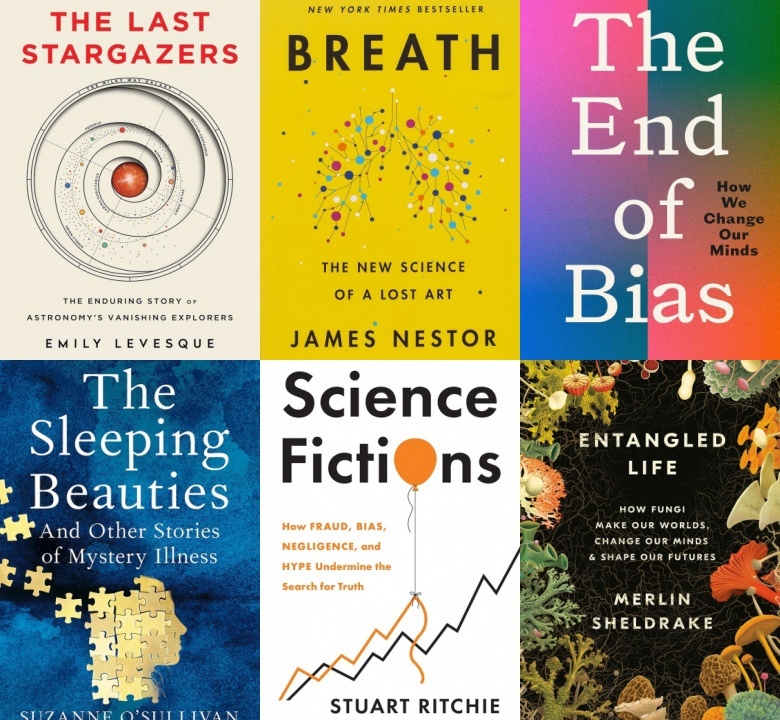 The_Last_Stargazers_by_Emily_Levesque.epub
2.24 MB
Please Share This
Related Posts
Many magazines
on the
→ MAGAZINELIB.COM
Book for today - 2019-2022