Follies Past: a Prequel to Pride and Prejudice by Melanie Kerr

Follies Past is the definitive prequel to Jane Austen’s classic, Pride and Prejudice. The story, characters, and setting are meticulously researched and written to give Jane Austen fans the closest thing possible to a new novel from her.

Before there was a single man in possession of a good fortune at Netherfield, there was a single man in want of a wife in London. His name was Wickham and he was bent on marrying himself into as much wealth as he might contrive, preferably to the detriment of the man who had destroyed all his prospects in life – the man known as Darcy of Pemberley.

The tale begins at Pemberley, at Christmas, almost a year before the opening of Pride and Prejudice. Caroline Bingley is convinced of Mr. Darcy’s affection and determined to convert his regard into matrimony as swiftly as possible. Fourteen-year-old Georgiana Darcy has been taken from school, and is about to be sent off to face the rigours of a life in London.

As the cast turn their faces to that city, one gentleman awaits them with all the charm and fascination that a handsome face and merciless ambition can beget.

The story follows young Georgiana to London, to Ramsgate and to the brink of a perilous elopement, bringing readers all the wit, the drama and the delights of their beloved Pride and Prejudice.

It was Jeff’s exposure to independent, self-sufficient women, Jeff believes, that later inspired him to write children’s stories that featured strong women, as in his first two books, The Man-In-The-Moon In Love and The Quiltmaker’s Gift.
Growing up, Jeff was interested in tales with a strong moral base, especially those found in eighteenth and nineteenth century children’s literature. In his stories, he wanted to create the same vibrancy and ethical values that are found in the classic tales of Hans Christian Andersen and the Grimm Brothers. For The Quiltmaker’s Gift, he selected the quilt as a symbol for the theme of giving and sharing, because a quilt represents the ultimate gift. It offers both practical warmth and artistic beauty.

1. Master of Netherfield
When Fitzwilliam Darcy graduates from University, his father decides to establish his son in a household at a great distance from Pemberley to provide a home for his younger sister away from the family seat. Wishing to keep his mistress close as he recovers from a recent illness, George Darcy gifts his heir with an estate named Netherfield in Hertfordshire. The challenge of building up the distant estate will keep his son away and provide a safe home to his daughter.
‘Master William’ takes on the responsibilities for Netherfield and his young sister with the help of his nearest neighbours, Mr. and Mrs. Thomas Bennet while the five Bennet daughters adopt Georgiana as another sister. Several years later, when George Darcy becomes ill and dies, William becomes ‘Mr. Darcy’. As the new master takes control of the great estate of Pemberley with his sister at his side, Georgiana asks that they return to their ‘home’ and ‘family’ in Hertfordshire. When Darcy realizes he misses their home in Hertfordshire and one Bennet sister in particular, they return.

2. Saving Jane
When no young man leases Netherfield Park and her daughters are referred to as ‘wall flowers’ at the Meryton Assembly, Mrs. Bennet becomes even more determined to find them husbands. The family is shocked to discover that Lydia will have an ‘unexpected visitor’ in the spring and to avoid scandal, the youngest daughter is married far from Longbourn. When Mr. Bennet announces the impending visit of his cousin, Mr. Collins, Mrs. Bennet sends Elizabeth to London to stay with the Gardiners. With Elizabeth out of the house, Mrs. Bennet speaks with Jane of her duty to her family.
When the engagement of Mr. Collins and Miss Jane Bennet is announced, Elizabeth is saddened and seeks solitude in the park across from the Gardiner’s home where she meets a distressed young lady who has been deserted by her lady’s companion. Miss Georgiana Darcy requires a friendly shoulder and an escort home where Elizabeth meets the cold, older brother. When Elizabeth and Georgiana begin a friendship based on books and music, Mr. Darcy pays attention to Miss Elizabeth Bennet and they begin to fall in love. But can Elizabeth and Darcy save Jane from her betrothal to Mr. Collins?

3. Follies and Nonsense
Pressured into an arranged marriage by her parents, Elizabeth Bennet was absent from Longbourn for three years. Now a widow with a young son, she returns to Meryton to help her family where she meets Mr. Darcy and takes the young man to task for his unkind statements at the Meryton Assembly. As they meet and talk at tea, suppers and hunting parties, they discover common interests and form a friendship that grows into a warm regard. Miss Bingley causes problems immediately and then Mr. Wickham, Mr. Collins, and Lady Catherine arrive on the scene to compound complications. While Elizabeth hides her situation from Mr. Darcy, his habit of doing things his own way creates misunderstandings and trouble.
What will his reaction be when he discovers the truth about her situation?

A Pride and Prejudice Variation series by Arabella Mead (3 Books)

A lifelong Jane Austen fan Arabella is lucky enough to live in Pemberley country with her husband, assorted menagerie of animals and two gorgeous young children. She gains inspiration for her writing from walking with her two dogs around the dales exploring the often breathtaking landscape of Derbyshire.

1. A Confusing Courtship
Elizabeth Bennet’s first meeting with the handsome Mr. Darcy is not an auspicious one and while he deplores her behaviour, she despises his arrogance. However, after several misunderstandings they begin to realise their feelings of anger and resentment have been replaced by admiration and love. But just as Elizabeth and Darcy are on the brink of happiness a shocking secret threatens any chance they have of a future together and Elizabeth is left questioning whether she will ever find her happy ever after.

2. Mr. Darcy’s Rush to Wed
Mr. Darcy has no wish to get married and yet if he doesn’t he risks losing his beloved Pemberley. To secure his home and his future his only choice is to find a woman willing to become his wife. Elizabeth Bennet has never wanted to get married and after turning down a proposal from Mr. Collins she takes up a post as a companion to Georgiana Darcy. When Mr. Darcy invites Elizabeth to become his wife in-spite of questioning her suitability, she turns him down and leaves her job. However, Georgiana’s wayward behaviour soon causes Mr. Darcy and Elizabeth to be thrown back together. United in their common aim to rescue Georgiana and her reputation, they slowly learn to trust each other. But just as Darcy and Elizabeth appear to reach an understanding, secrets and lies threaten to destroy their happiness. Will their love be strong enough to ensure they reach their happy ever after?

3. Rivals for Elizabeth’s Heart
Elizabeth Bennet is determined to marry a man she loves. Although quick to deny it, Fitzwilliam Darcy is fascinated by the captivating Miss Elizabeth Bennet. As their paths cross in Hertfordshire and Kent his feelings for her vacillate between admiration, disdain and fury. But when his feelings finally deepen to love as they battle family responsibilities and scandalous love affairs he is horrified to discover he has left it too late and there is someone else who has captured her heart. How far is Darcy prepared to fight to make Elizabeth his?

A Cat-Lover’s Romp through Jane Austen’s Classic: What if Jane Austen’s Pride and Prejudice was told from a cat’s point of view? On the heels of smash hits like Pride and Prejudice and Zombies and I Can Has Cheezburger, this hilarious mash-up by children’s author Pamela Jane and photographer Deborah Guyol spins a fresh, quirky take on two of the things we just can’t get enough of: classic cats and classic Jane.

Pride and Prejudice and Kitties juxtaposes wacky photos of cats with the wicked humor of Jane Austen, and it’s just in time for the 200-year anniversary of the publication of the original Pride and Prejudice. Soulful Mr. Darcy gazes at Elizabeth Bennet in fascination; hysterical Mrs. Bennet yowls that no one understands her; somnolent Mr. Hurst passes out on the sofa after dinner; arrogant Lady Catherine hisses at Elizabeth. Each photo includes a hilarious caption that goes along with the text of Pride and Prejudice, told from a feline perspective.

Pride and Prejudice and Kitties is a book for cat-lovers, Austen-lovers, and people who love to laugh—in other words, just about everyone. The adorable meets the absurd! 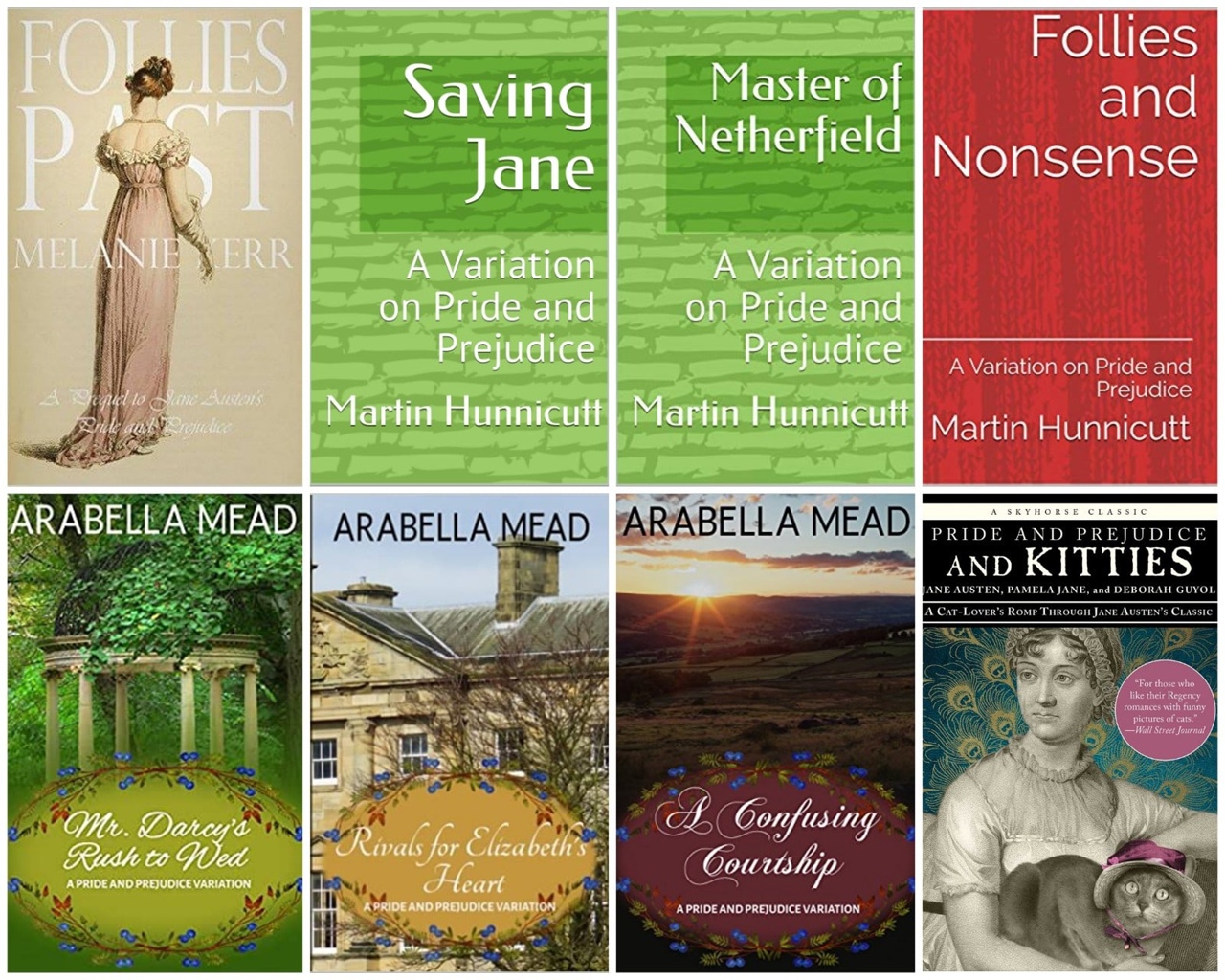 Martin_Hunnicutt_-_Follies_and_Nonsens.epub
442.96 KB
Please Share This
Related Posts
Many magazines
on the
→ MAGAZINELIB.COM
Book for today - 2019-2022