Dean Ray Koontz is an American author. His novels are billed as suspense thrillers, but frequently incorporate elements of horror, fantasy, science fiction, mystery, and satire.

1. In the Heart of the Fire – A bloodthirsty sheriff is terrorizing a small Texas town where justice has been buried with his victims. Until Nameless arrives—a vigilante whose past is a mystery and whose future is written in blood.
Anyone who crosses Sheriff Russell Soakes is dead, missing, or warned. One of them is a single mother trying to protect her children but bracing herself for the worst. Nameless fears the outcome. He’s seen it in his visions. Now it’s time to teach the depraved Soakes a lesson in fear. But in turning predators into prey, will Nameless unearth a few secrets of his own?

2. Photographing the Dead – A self-styled artist is getting away with murder in Death Valley. If all goes well, so will Nameless. In part two of the Nameless series, the relentless avenger is haunted by nightmares of the past and visions of what’s to come.
Palmer Oxenwald’s hunting ground is the Mojave wasteland. His victims are random tourists and hikers. His trophies are cherished photographs of the damage he’s done. His greatest threat is Nameless. Two men with one thing in common: memories of the dead. For a psychopath like Palmer, they’re a clear rush in black and white. For Nameless, they’re visions of violence buried and erased. But for how long?

3. The Praying Mantis Bride – A deadly black widow has eliminated three husbands and counting. But Nameless knows her one weakness. To bring truth and its consequences to her crimes, the vigilante must spin a web of his own in part three of the Nameless series.
Lucia—current last name, Rickenbah—has made a fortune by marrying rich men who tend to drop dead. But the superstitious blonde believes in more than money and murder. Nameless’s job is to scare a confession out of Lucia, and as the psychological warfare escalates, even he may be in for a shock.

4. Red Rain – In a town where the corrupt are protected, a bereaved mother seeks retribution for an arsonist’s deadly crimes. Only Nameless can help ease the burden of her grief—and satisfy her rage—in part four of this thrilling series.
After a suspicious house fire, Regina Belmont lost her two children, was left disfigured, and was abandoned by her gutless husband. Brokenhearted and bullied into silence by corrupt officials, Regina’s only recourse for truth and justice is Nameless. There’s something about this case that’s breaking Nameless’s heart as well. But can he bear to remember why?

5. The Mercy of Snakes – A series of suspicious deaths in a retirement home draws Nameless into the confidence of a terrified former resident—and into the dark heart of a shocking conspiracy. In part five of the Nameless series, it’s time to hunt.
Oakshore Park is Michigan’s most exclusive assisted-living community. Presided over by two killer angels of mercy, it’s also the go-to facility in assisted dying. For a cut, they make impatient heirs happy. Nameless must concoct a scheme just as cunning. But righteous retribution stirs disquiet in the avenger as light starts to shine on the black hole of his past. Should he welcome it or keep running?

6. Memories of Tomorrow – What strange science made Nameless who he is? What catastrophes have been erased from his memories? In the stunning conclusion of this series, the dark past comes flooding back, and Nameless must decide how much he really wants to know.
In Indiana, a murderous psycho has kidnapped his own six-year-old stepson, Jamie, and secreted him away in a subterranean cave. It’s become their bunker. For Nameless, the case is breaking down his defenses, and it may force him to face his memories. 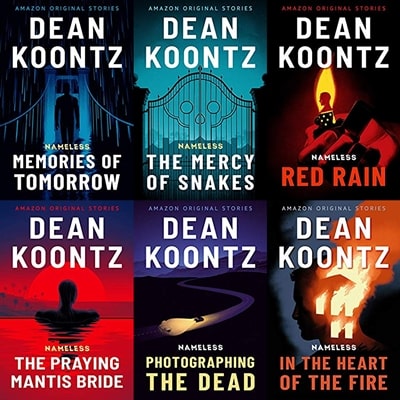