Throughout the 1990s and the 2000s, Istvan, Balazs, and Magdolna Hargittai conducted hundreds of interviews with leading scientists in physics, chemistry, materials, and biomedical research. These interviews appeared in a variety of publications, including Chemical Intelligencer, Mathematical Intelligencer, and Chemical Heritage. In four-thousand pages of interviews, the Hargittais had conversations with over a hundred Nobel laureates, along with many other top minds and personalities in various scientific fields.
Now, in a single volume, the Hargittais have gathered the best and most notable moments of these interviews, creating a survey of the past, present, and future of science, as told by some of the most influential members of many scientific disciplines. Figures like James D. Watson, Francis Crick, and Glenn T. Seaborg share their thoughts in these pages, in a collection that includes 68 Nobel Laureates. Without exaggeration, their backgrounds come from all over the globe: scientists from the United States, the United Kingdom, Canada, France, Germany, Israel, Russia, Sweden, Switzerland, and Taiwan are featured. These interviews discuss many of the most prominent debates and issues in today’s scientific climate. Great Minds is a synthesis of scientific thought, as told by some of the most notable scientists of the twentieth and twenty-first centuries. 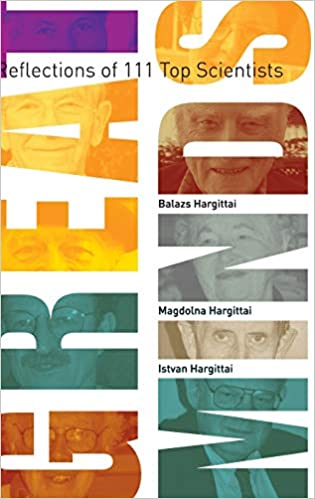 Great Minds Reflections of 111 Top Scientists.pdf
4.74 MB
Please Share This
Related Posts
Many magazines
on the
→ MAGAZINELIB.COM
Book for today - 2019-2022