Great Minds of Business and Economics: My Life and Work, Autobiography of Andrew Carnegie, and Lombard Street

Three classic works on the art of succeeding in business, life, and high finance from three of modern history’s most influential thought leaders.

My Life and Work: A legendary inventor and industrialist, Henry Ford pioneered the American automotive industry. In this combination of memoir and business treatise, he describes his early life as a mechanically inclined farmer’s son, the inner workings of his eponymous motor company, and the development of the Model T. He also discusses key workplace principles such as compensating workers beyond the prevailing wage and building a diverse workforce.

The Autobiography of Andrew Carnegie: Scottish immigrant Andrew Carnegie worked his way up from bobbin boy to telegraph operator to railroad man, learning lessons along the way that would lead to his unparalleled success in the steel industry. In this acclaimed memoir, he shares his story of living the American dream, as well as insights on education, business, and the need to give back for the common good.

Lombard Street: Written in response to a nineteenth-century banking crisis in England, Walter Bagehot’s influential treatise was one of the first to clearly explain complex financial systems in accessible language. As editor in chief of the Economist, Bagehot also makes proposals for strengthening the economy, such as allowing irresponsible banks to collapse and creating strong central banks to combat inflation. His insights are as relevant today as they were when the book was first published in 1873.
Download Directly from Usenet. Sign up now to get Two We 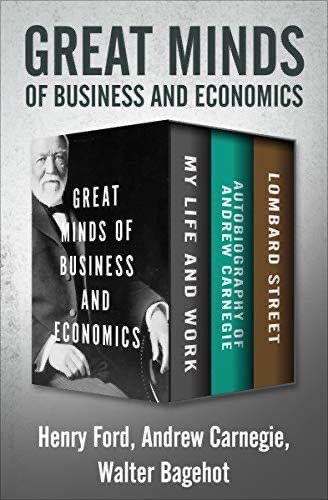 Great Minds of Business and Economics.epub
7.91 MB
Please Share This
Related Posts
Many magazines
on the
→ MAGAZINELIB.COM
Book for today - 2019-2022