A young, orphaned shapeshifter in a world that fears magic must risk everything if she hopes to save her only friend in Elayne Audrey Becker’s Forestborn, first in a new fantasy series with a timeless feel.

TO BE BORN OF THE FOREST IS A GIFT AND A CURSE.

Rora is a shifter, as magical as all those born in the wilderness–and as feared. She uses her abilities to spy for the king, traveling under different guises and listening for signs of trouble.

When a magical illness surfaces across the kingdom, Rora uncovers a devastating truth: Finley, the young prince and her best friend, has caught it, too. His only hope is stardust, the rarest of magical elements, found deep in the wilderness where Rora grew up–and to which she swore never to return.

But for her only friend, Rora will face her past and brave the dark, magical wood, journeying with her brother and the obstinate, older prince who insists on coming. Together, they must survive sentient forests and creatures unknown, battling an ever-changing landscape while escaping human pursuers who want them dead. With illness gripping the kingdom and war on the horizon, Finley’s is not the only life that hangs in the balance.

Take Me with You When You Go by David Levithan, Jennifer Niven

From the New York Times bestselling authors of All the Bright Places and Every Day comes a story of hope, family, and finding your home in the people who matter the most.

Ezra Ahern wakes up one day to find his older sister, Bea, gone. No note, no sign, nothing but an email address hidden somewhere only he would find it. Ezra never expected to be left behind with their abusive stepfather and their neglectful mother – how is he supposed to navigate life without Bea?

Bea Ahern already knew she needed to get as far away from home as possible. But a message in her inbox changes everything, and she finds herself alone in a new city – without Ez, without a real plan – chasing someone who might not even want to be found.

As things unravel at home for Ezra, Bea confronts secrets about their past that will forever change the way they think about their family. Together and apart, broken by abuse but connected by love, this brother and sister must learn to trust themselves before they can find a way back to each other.

The Last Words We Said by Leah Scheier

All the Bright Places meets If I Stay in this heart-wrenching, romantic novel about a tight-knit group of teen girls coping with a devastating loss and what happens when your best friend is also your first love… and your first heartbreak.

Nine months ago, Danny disappeared. His closest friends, Ellie, Rae, and Deenie, are all dealing with the loss differently. Rae’s pouring herself into rage-baking. Deenie’s deepening her commitment to Orthodox Judaism. And Ellie—who was Danny’s girlfriend and closest friend—is the only one who doesn’t believe he’s dead.

Because she still sees him.

In chapters that alternate between past and present, the story of Ellie and Danny unspools—from their serendipitous meeting to Danny’s effortless absorption into the girls’ friend group to Danny and Ellie falling for each other. In the past, they were the perfect couple…until it all went wrong. In the present, Ellie’s looking for answers.

She, Rae, and Deenie all have secrets, and they each hold a clue about the night Danny disappeared. Can the friends come together to uncover the truth about Danny? Or will tragedy drive them apart for good?

Enola Holmes is the much younger sister of her more famous brothers, Sherlock and Mycroft. But she has all the wits, skills, and sleuthing inclinations of them both. At fifteen, she’s an independent young woman–after all, her name spelled backwards reads ‘alone’–and living on her own in London. When a young professional woman, Miss Letitia Glover, shows up on Sherlock’s doorstep, desperate to learn more about the fate of her twin sister, it is Enola who steps up. It seems her sister, the former Felicity Glover, married the Earl of Dunhench and per a curt note from the Earl, has died. But Letitia Glover is convinced this isn’t the truth, that she’d know–she’d feel–if her twin had died.

The Earl’s note is suspiciously vague and the death certificate is even more dubious, signed it seems by a John H. Watson, M.D. (who denies any knowledge of such). The only way forward is for Enola to go undercover–or so Enola decides at the vehement objection of her brother. And she soon finds out that this is not the first of the Earl’s wives to die suddenly and vaguely–and that the secret to the fate of the missing Felicity is tied to a mysterious black barouche that arrived at the Earl’s home in the middle of the night. To uncover the secrets held tightly within the Earl’s hall, Enola is going to require help–from Sherlock, from the twin sister of the missing woman, and from an old friend, the young Viscount Tewkesbury, Marquess of Basilwether!

The Royals Next Door by Karina Halle

An ordinary summer goes royally awry when a prince and princess move next door, bringing their handsome bodyguard with them, from New York Times bestselling author Karina Halle.

Piper Evans: elementary school teacher by day–avid romance reader and anonymous podcaster by night. She lives a quiet, reclusive life, taking care of her mother, who struggles with mental illness, avoiding her regrettable ex, who bartends in town, and trying to make inroads in the tight-knit island community that still sees her, five years in, as an outsider.

And she’s happy with how things are–really–until British royals rent the property next to hers and their brooding bodyguard decides she’s a security threat. Piper quickly realizes that one person’s fairy tale is an ordinary woman’s nightmare as a media frenzy takes over the island and each run-in with Harrison Cole is hotter and more confusing than the last. But beneath Harrison’s no-nonsense exterior lies a soft heart, one that could tempt a woman who’s sworn off attachments into believing in white knights.

But when Piper finds herself smack in the middle of a royal scandal that rocks the island she’ll need more than Harrison’s strong arms to shield her–she’ll have to do a little rescuing herself. With careers, hearts, and friendships on the line, Piper and Harrison will have to decide what they’re willing to give up for a chance at their own happily ever after.

The Last Magician meets The Lady’s Guide to Petticoats and Piracy in this thrilling and atmospheric historical fantasy following a young woman who discovers she has magical powers and is thrust into a battle between witches and wizards.

In 1911 New York City, seventeen-year-old Frances Hallowell spends her days as a seamstress, mourning the mysterious death of her brother months prior. Everything changes when she’s attacked and a man ends up dead at her feet—her scissors in his neck, and she can’t explain how they got there.

Before she can be condemned as a murderess, two cape-wearing nurses arrive to inform her she is deathly ill and ordered to report to Haxahaven Sanitarium. But Frances finds Haxahaven isn’t a sanitarium at all: it’s a school for witches. Within Haxahaven’s glittering walls, Frances finds the sisterhood she craves, but the headmistress warns Frances that magic is dangerous. Frances has no interest in the small, safe magic of her school, and is instead enchanted by Finn, a boy with magic himself who appears in her dreams and tells her he can teach her all she’s been craving to learn, lessons that may bring her closer to discovering what truly happened to her brother.

Frances’s newfound power attracts the attention of the leader of an ancient order who yearns for magical control of Manhattan. And who will stop at nothing to have Frances by his side. Frances must ultimately choose what matters more, justice for her murdered brother and her growing feelings for Finn, or the safety of her city and fellow witches. What price would she pay for power, and what if the truth is more terrible than she ever imagined?

It’s Not You, It’s Me by Gabrielle Williams

Holly Fitzgerald has inexplicably woken up inside the body of an LA teenager called Trinity Byrne in 1980 – trapping Trinity in Holly’s forty-year-old body back in Melbourne, 2020.

Holly finds herself navigating a brand-new body, family and cute boy next door – not to mention rock band that might just make it, and potential kidnapper. Meanwhile, lies intersect with truth, hurtling both Holly and Trinity towards a dangerous fate as the connections between them grow deeper and stranger than either could have ever imagined.

Freaky Friday meets Pretty Little Liars – if the Liars were an all-girl punk band from the 1980s – in this highly original soul-swap story from the critically acclaimed author of My Life as a Hashtag.

Leocadia arrives home from school to find her mom’s body. Unaware that the killer still lingers, she rushes to her mother’s side, only to be grabbed from behind. And everything fades to black.
Leo has been battling personal demons after a year of retrograde amnesia. She’s been having vivid dreams of that day. And her dreams are getting worse—she’s starting to remember. Two more bodies are discovered and they are oddly linked to her mom’s unsolved homicide.
Leo befriends her new neighbor. He’s eager to visit Star Hallow’s notorious haunted mansion. It’s located on a deserted cul-de-sac where she once lived and where her mom was murdered. But it’s the Lucien Estate, the mansion next door to her old home, where they happen upon misty ghosts, ghosts that just might help to unravel the homicides.
Will Leo’s memories send her reeling into a relapse, or will she be able to overcome her demons to find her mother’s killer – only to become the next victim?

A piercing howl of a novel about one young woman’s endless quest for an apartment of her own and the aspirations and challenges faced by the Millennial generation as it finds its footing in the world, from a shockingly talented debut author.

“A woman must have money and a room of one’s own.” So said Virginia Woolf in her classic A Room of One’s Own, but in this scrupulously observed, gorgeously wrought debut novel, Jo Hamya pushes that adage powerfully into the twenty-first century, to a generation of people living in rented rooms. What a woman needs now is an apartment of her own, the ultimate mark of financial stability, unattainable for many.

Set in one year, Three Rooms follows a young woman as she moves from a rented room at Oxford, where she’s working as a research assistant; to a stranger’s sofa, all she can afford as a copyediting temp at a society magazine; to her childhood home, where she’s been forced to return, jobless, even a room of her own out of reach. As politics shift to nationalism, the streets fill with protestors, and news drip-feeds into her phone, she struggles to live a meaningful life on her own terms, unsure if she’ll ever be able to afford to do so. 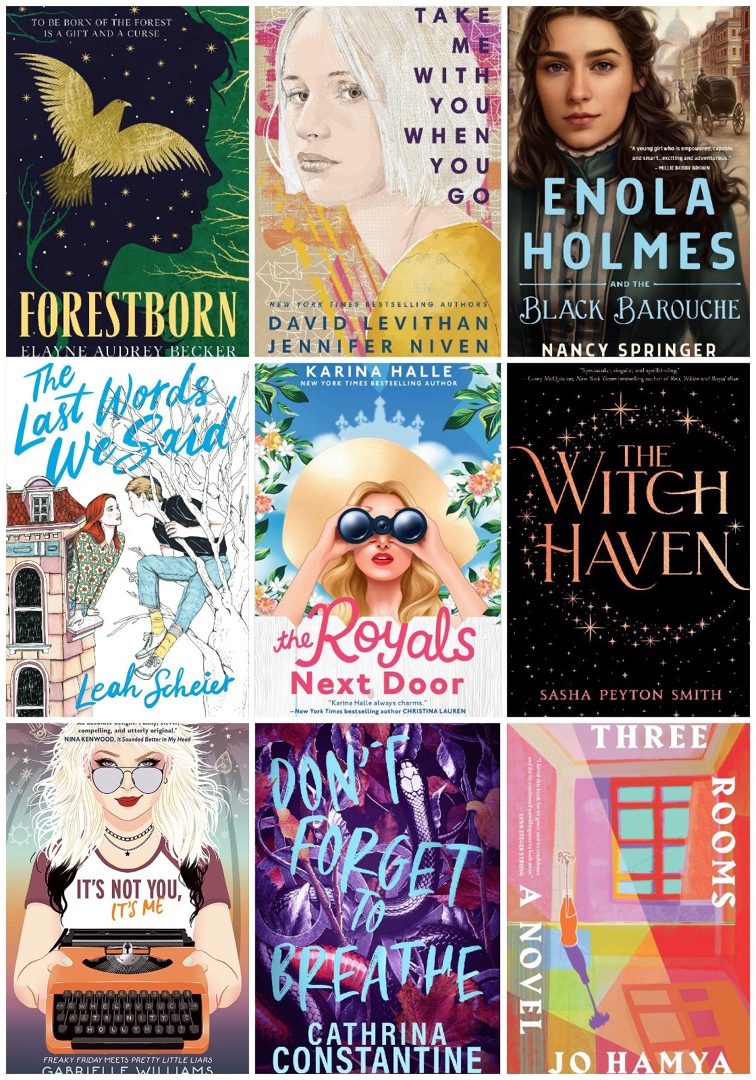 Take_Me_With_You_When_You_Go_-_David_Levithan.epub
1.23 MB
Please Share This
Related Posts
Many magazines
on the
→ MAGAZINELIB.COM
Book for today - 2019-2022