Ebola: The Natural and Human History of a Deadly Virus by David Quammen

Overview: “A frightening and fascinating masterpiece of science reporting that reads like a detective story.” —Walter Isaacson

In 1976 a deadly virus emerged from the Congo forest. As swiftly as it came, it disappeared, leaving no trace. Over the four decades since, Ebola has emerged sporadically, each time to devastating effect. It can kill up to 90 percent of its victims. In between these outbreaks, it is untraceable, hiding deep in the jungle. The search is on to find Ebola’s elusive host animal. And until we find it, Ebola will continue to strike. Acclaimed science writer and explorer David Quammen first came near the virus while he was traveling in the jungles of Gabon, accompanied by local men whose village had been devastated by a recent outbreak. Here he tells the story of Ebola—its past, present, and its unknowable future.

Extracted from Spillover by David Quammen, updated and with additional material. 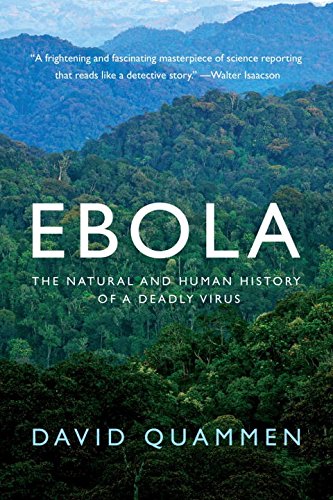