Coup d’État: A Practical Handbook, first published in 1968, is a history book by Edward Luttwak examining the conditions, strategy, planning, and execution of coups d’état. A revised edition of the book, with references to twenty-first century technology, was published in 2016.

Coup d’État astonished readers when it first appeared in 1968 because it showed, step by step, how governments could be overthrown. Translated into sixteen languages, it has inspired anti-coup precautions by regimes around the world. In addition to these detailed instructions, Edward Luttwak’s revised handbook offers an altogether new way of looking at political power―one that considers, for example, the vulnerability to coups of even the most stable democracies in the event of prolonged economic distress.

The world has changed dramatically in the past half century, but not the essence of the coup d’état. It still requires the secret recruitment of military officers who command the loyalty of units well placed to seize important headquarters and key hubs in the capital city. The support of the armed forces as a whole is needed only in the aftermath, to avoid countercoups. And mass support is largely irrelevant, although passive acceptance is essential. To ensure it, violence must be kept to a minimum. The ideal coup is swift and bloodless. Very violent coups rarely succeed, and if they trigger a bloody civil war they fail utterly.

Luttwak identifies conditions that make countries vulnerable to a coup, and he outlines the necessary stages of planning, from recruitment of coconspirators to postcoup promises of progress and stability. But much more broadly, his investigation of coups―updated for the twenty-first century―uncovers important truths about the nature of political power. 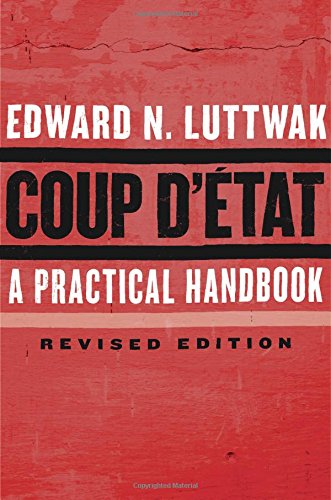