At no time in American history has an understanding of the role and the art of diplomacy in international relations been more essential than it is today. Both the history of United States diplomatic relations and the current United States foreign policy in the 21st century are major topics of study and interest in America and around the world. Spanning the entire history of American diplomacy — from the first Continental Congress, to the war on terrorism, to the foreign policy goals of the 21st century — Guide to U.S. Foreign Policy traces not only the growth and development of diplomatic policies and traditions, but also the shifts in public opinion that shape diplomatic trends. This comprehensive, two-volume reference shows how the United States gained ‘the strength of a giant’ and also analyzes key world events that have determined the United States’ changing relations with other nations. A three-part structure makes the key concepts and issues accessible to researchers: Part One features 40 topical and historical chapters, in which expert writers cover the diplomatic initiatives of the United States from colonial times through the present day. Part Two is an A to Z handbook of diplomatic terms and concepts, people, events, and issues in American foreign policy. Part Three features a collection of annotated primary source documents that support the work. This unique reference highlights the changes in U.S. diplomatic policy as government administrations and world events influenced national decisions. Topics include imperialism, economic diplomacy, environmental diplomacy, foreign aid, wartime negotiations, presidential influence, NATO and its role in the twenty-first century, and the response to terrorism. Additional featured topics include the influence of the American two-party system, the impact of U.S. elections, and the role of the United States in international organizations. Guide to U.S. Foreign Policy is the first comprehensive reference work in this field that is both historical and thematic. This work will be of immense value for researchers, students, and others studying foreign policy, international relations, and U.S history.

For basic information on the electoral process, in-depth analysis on specific political eras and issues, and everything in between, Guide to U.S. Elections has no competition. This renowned reference includes thorough historical coverage of every major aspect of federal and gubernatorial elections in the United States. Infused with new data, analysis, and discussion of issues relating to elections from 2006 to 2008, the sixth edition of the Guide is as up to date as it is comprehensive. The new edition covers topics on the 2008 elections and includes an analysis of the presidential primaries through the general election; data on the candidates, winners/losers, and election returns; and details on congressional and gubernatorial contests with vast historical data.

Focusing on Congress, the United States’ supreme law-making body, this reference covers such issues as how media reporting has affected the ability of Congress to function; and how the GOP leadership and its region of dedicated conservatives changed the tenor of debate in Congress.

This brand new edition of “Guide to the U.S. Supreme Court” reflects the substantial changes in the makeup of the High Court and landmark rulings from recent Court terms. No other reference on the Court offers so much detail and insight in such a readable format. Updated through the 2008-2009 term, this classic resource explains everything readers need to know about the Supreme Court, from its origins and how it functions to the people who have shaped it and the impact of its decisions on American life and the path of U.S. constitutional law. Updates include the following: the appointments of Chief Justice John G. Roberts, as well as Associate Justices Samuel Alito and Sonia Sotomayor – featuring biographies and background information; a new chapter on the emergence of Second Amendment protections for the Right to Bear Arms; new content on individual rights; new information and detail on how cases currently get to the Court, and how the process has changed over time; and, expanded content on selecting justices and the confirmation politics of judicial appointments. Landmark decisions and key cases include: District of Columbia v. Heller (2008) – gun rights and the Second Amendment; Boumediene v. Bush (2008) – Guantanamo and habeas corpus; and, Roper v. Simmons (2005) – on death penalty and juveniles. “Guide to the U.S. Supreme Court” covers the Court’s entire history; its operations; its power in relation to other branches of government; major decisions affecting the other branches, the states, individual rights and liberties; and, biographies of the justices. Appendixes provide additional information on the Court such as the Judiciary Acts of 1789 and 1925 and a list of Acts of Congress found by the Court to be unconstitutional. A general name and subject index speeds research, and a case index quickly guides readers to all decisions discussed in the Guide. This title covers three new Supreme Court justices and the confirmation process. It demonstrates how cases get to the Court. It includes new content on individual rights; and a new chapter on the Second Amendment. 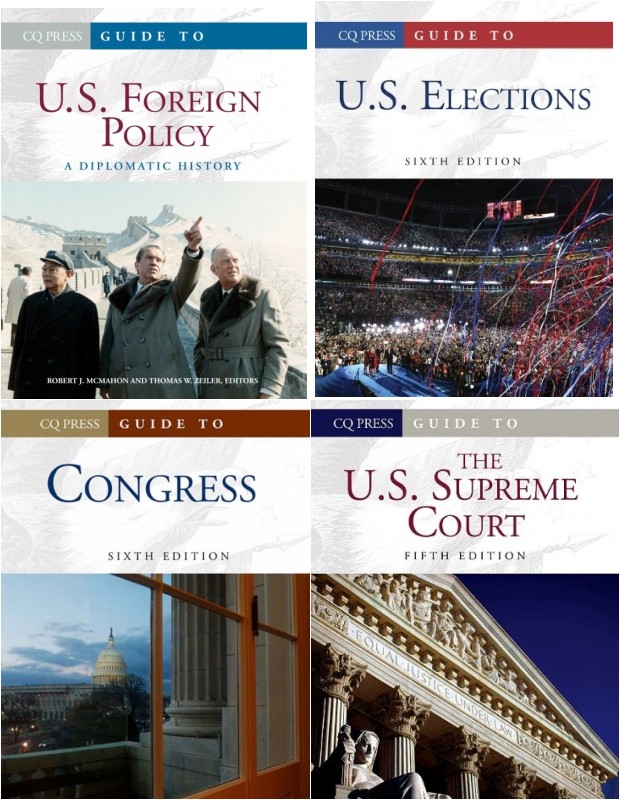