The southeastern people were the descendants of ancient prehistoric Indian cultures, and were probably on the decline when first known to Europeans. Despite being poorly reported in popular histories, they have been well described by several early European traders and by a number of well-known American ethnologists who collected details of surviving native culture in the late 19th and early 20th centuries. The white man’s expanding plantation society and the tragic removal of the Indian population to Indian Territory saw the end of this farming, hunting and trading culture. This title examines the absorbing history and culture of the native peoples of the southeastern United States.

This focuses on the history, costume, and material culture of the native peoples of North America. It was in the Southwest – modern Arizona, New Mexico, and parts of California and other neighboring states – that the first major clashes took place between 16th-century Spanish conquistadors and the indigenous peoples of North America. This history of contact, conflict, and coexistence with first the Spanish, then their Mexican settlers, and finally the Americans, gives a special flavor to the region. Despite nearly 500 years of white settlement and pressure, the traditional cultures of the peoples of the Southwest survive today more strongly than in any other region. The best-known clashes between the whites and the Indians of this region are the series of Apache wars, particularly between the early 1860s and the late 1880s. However, there were other important regional campaigns over the centuries – for example, Coronado’s battle against the Zuni at Hawikuh in 1540, during his search for the legendary “Seven Cities of Cibola”; the Pueblo Revolt of 1680; and the Taos Revolt of 1847 – and warriors of all of these are described and illustrated in this book.

The Indian tribes of the Pacific Northwest, both on the Coast and the inland Plateau, were the last to encounter white traders and settlers. When contact occured in the late 18th century the explorers and traders found two distinct cultures. The fairly recent adoption of the horse had opened the Plateau tribes to influences from the peoples of the Plains; but the tribes of the Coast presented a sharply different picture, involving rigid class hierarchies, an economy based on fishing and hunting marine animals, and frequent intertribal warfare which involved slave raiding and head hunting. This fascinating text describes the ways of life, in peace and war, of the coastal and inland peoples of this region.

This book offers a detailed introduction to the tribes of the New England region – the first native American peoples affected by contact with the French and English colonists. By 1700 several tribes had already been virtually destroyed, and many others were soon reduced and driven from their lands by disease, war or treachery. The tribes were also drawn into the savage frontier wars between the French and the British. The final defeat of French Canada and the subsequent unchecked expansion of the British colonies resulted in the virtual extinction of the region’s Indian culture, which is only now being revived by small descendant communities.

This book details the growth of the European Fur trade in North America and how it drew the Native Americans who lived in the Great Lakes region, notably the Huron, Dakota, Sauk and Fox, Miami and Shawnee tribes into the colonial European Wars. During the French and Indian War, the American Revolution, and the War of 1812, these tribes took sides and became important allies of the warring nations. However, slowly the Indians were pushed westward by the encroachment of more settlers. This tension finally culminated in the 1832 Black Hawk’s War, which ended with the deportation of many tribes to distant reservations.

The central plains of North America to the east of the Rocky Mountains were home to the Plains Indians; here the hunting grounds of the twelve “typical” tribes coincided with the grazing range of the largest of the buffalo herds. The adoption of a horse culture heralded the golden age of the Plains Indians – an age abruptly ended by the intervention of the white man, who forced them into reservations in the second half of the 19th century. Jason Hook’s fascinating text explores the culture of American Plains Indians, from camp life to conquest, in a volume complemented by photographs and stunning artwork. Men-at-Arms 163 and 186 and Warrior 4 are also available in a single volume special edition as ‘To Live and Die in the West’.

The Woodland cultural areas of the eastern half of America has been the most important in shaping its history. This volume details the history, culture and conflicts of the ‘Woodland’ Indians, a name assigned to all the tribes living east of the Mississippi River between the Gulf of Mexico and James Bay, including the Siouans, Iroquians, and Algonkians. In at least three major battles between Indian and Euro-American military forces more soldiers were killed than at the battle of Little Bighorn in 1876, when George Custer lost his command. With the aid of numerous illustrations and photographs, including eight full page colour plates by Richard Hook, this title explores the history and culture of the American Woodland Indians.

The Five (later Six) Nations of the Iroquois Confederacy were central to the story of the white colonization of the American Northeast. The European fur trade transformed their world, and the struggles between English and French colonists forced the tribes to take sides. Sir William Johnson’s efforts in the Mohawk Valley ensured that the Iroquois Nations were allies of the British crown; and the loyalty of his kinsman Joseph Brant (Thayendanegea) during the American Revolution forced the Mohawks into Canadian exile. This richly illustrated book introduces Iroquois history, social organization, religion and material culture.

The horse culture of the tribes of the High Plains of North America lasted only some 170 years; yet in that time the sub-tribes of the Teton or Western Sioux people imprinted a vivid image on the world’s imagination by their fearless but doomed fight to protect their hunting grounds from the inevitable spread of the white man. This text outlines the history, social organization, religion and material culture of the Santee, Yankton and Teton Sioux; rare early photographs include portraits of many of the great war chiefs and warriors of the Plains Indian Wars, and eight detailed plates record details of Sioux traditional costume. 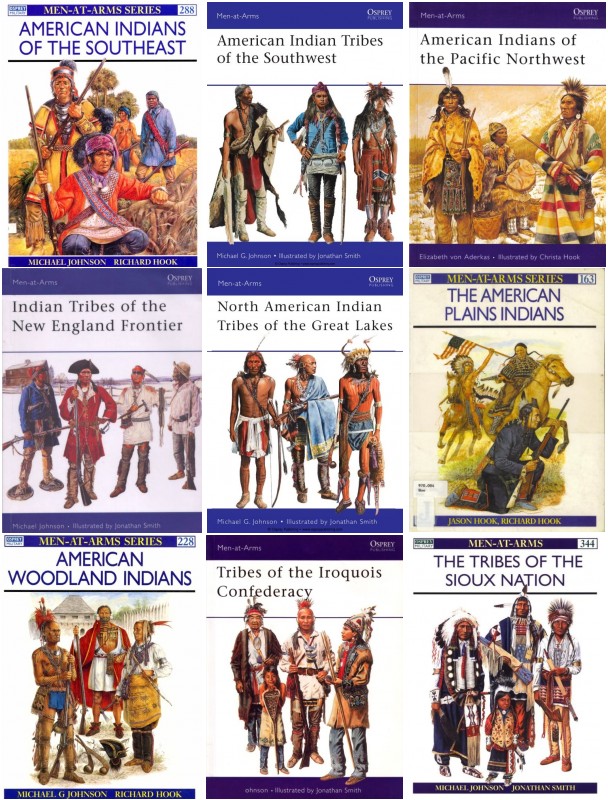